Study by OHCOW, with IWH support, draws on survey of 4,000 workers during April 2020

Nearly six in 10 surveyed health-care workers in Canada reported anxiety at levels surpassing an accepted threshold for clinical screening for the condition, according to a survey of 4,000 workers conducted in April.

In the survey, those reporting none of their PPE needs were met were the most anxious, with 65 per cent reporting anxiety levels higher than the cut-off score of 3. In comparison, of the 18 per cent of the respondents who said all their PPE needs were met, only 43 per cent scored higher than 3. Anxiety levels also increased as workers reported inadequate COVID-19 policies and practices, but less steeply.

“We expected to see heightened anxiety and depression during this pandemic, but we didn’t expect to see levels this high,” says Oudyk. “What’s notable is that, if PPE protection and infection control policies and practices are adequate, then this mental health burden can be reduced.”

As with any survey where recruitment is done by word of mouth, results could be over-represented by people motivated to report negative experiences, Smith notes. “However, while this may lead to higher levels of anxiety and depression in the survey population compared to the health-care worker population at large, it is less likely to affect outcomes showing the relationship between PPE and policy and procedure needs,” he adds.

Oudyk credits the ongoing relationships among stakeholders and researchers for the speed with which this study was launched. Oudyk, who had partnered previously with Smith on research related to psychosocial work conditions, has also been involved in a research network with several health-care unions since the 2003 SARS-1 outbreak. It was this latter group that saw, in January and February of this year, a need and an opportunity to conduct this study—in time, says Oudyk, “to capture health-care workers’ perceptions and experiences of the risks as events were unfolding.” 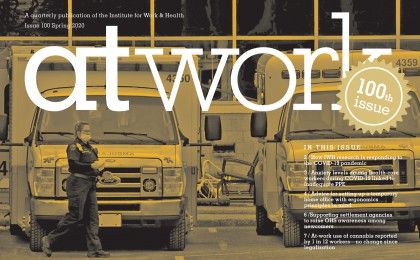