When people are injured at work, whether they report it to a workers’ compensation board or not is linked to whether they are exposed to a common work hazard.

That’s according to a study conducted in British Columbia, Alberta and Ontario by the Institute for Work & Health (IWH), which built upon previous findings about under-reporting of work injuries.

The study shines a light on lower reporting patterns among workers who were injured but who didn’t work in jobs that were typically recognized as hazardous, says IWH Senior Scientist Dr. Peter Smith, lead investigator of the study.

If you think about an office worker who hurts their back lifting a box of documents, this worker could be less likely to report the injury than someone who lifts and carries heavy things regularly as part of their job, he adds.

The study drew on the survey results of 2,800 people who worked at least 15 hours a week in one of the three provinces. These workers were asked in November 2017 to June 2018 to complete the OHS Vulnerability Survey, a 27-item IWH tool developed by Smith.

The tool asks workers to indicate if they are exposed at least weekly to one or more of nine common work hazards. These range from heavy lifting and repetitive movements to working at heights and exposure to hazardous substances (see sidebar below). The tool also asks workers about the adequacy of three dimensions of OHS protection in their workplace—namely, policies and practices, awareness and empowerment.

Of the 326 surveyed workers who said they had been injured in the previous 12 months, 64 per cent said they did not report their injury to a workers’ compensation board. This under-reporting was consistent in all three provinces; little difference in reporting levels was found among them.

While the finding about the degree of under-reporting is consistent with those from other studies, the finding about the role of hazards enriches our understanding of under-reporting, says Victoria Nadalin, an IWH research associate and lead author of the article on this study, published in January 2020 in the American Journal of Industrial Medicine (doi: 10.1002/ajim.23094).

Why are reporting patterns lower among workers who weren’t regularly exposed to common hazards? says Nadalin. That’s something we would need to explore in future studies, but it may have something to do with levels of awareness about the importance of injury reporting.

Indeed, when asked questions related to their awareness of OHS rights and responsibilities, the injured workers with inadequate awareness were less likely to report. Workers with inadequate workplace policies and practices also tended to under-report, but this was not statistically significant. Those with low levels of empowerment (i.e. those who felt they had limited ability to speak up about hazards) were neither more nor less likely to report their injuries than those who felt more empowered.

The research team also found other notable patterns of under-reporting. Although not statistically significant, these patterns included a higher likelihood of under-reporting among women, part-time workers, workers in the education, health and public administration sectors, workers who were not unionized, and workers with higher education (i.e. a post-graduate degree).

The research team noted a number of limitations in the study that should be considered when interpreting the findings. Information on the nature and severity of injury and the length of time off work was not obtained from workers participating in the survey. Previous studies have shown that belief that the injury is not serious is an important reason for workers not reporting injuries to workers’ compensation. Although self-employed workers were excluded from the study sample, other workers may not have been eligible for workers’ compensation coverage. Additionally, some workers may have reported injuries where the contribution of work exposures was minor compared to non-work exposures.

We started this study because we were interested in injury-reporting patterns among workers who were exposed to hazards with inadequate OHS protection—and therefore more likely to have a work-related injury or illness, say Smith. It’s encouraging to see that people most exposed to work hazards are more likely to report their injuries. But it’s also important to note that workers with inadequate OHS awareness were less likely to report injuries. This suggests that, when we are making workers aware of their OHS rights and responsibilities, we should also include information on the right to compensation if they get injured or ill at work.

What does the study consider a common hazard?

The Institute for Work & Health's OHS Vulnerability Measure used in this study asks workers how often they perform work tasks that may expose them to hazards. Workers are considered exposed to hazards if they: 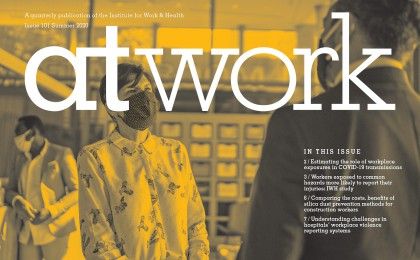