Cochrane Back and Neck, housed at IWH until this year, has repeatedly ranked high in quality assessments and measures of impact

About eight in 10 Canadians are expected to experience low-back pain at some point in their lives. The condition is one of the top causes of work disability and one of the costliest musculoskeletal problems in Canada and other industrialized countries.

That may be one of the reasons for the strong interest in Cochrane Back and Neck (CBN)’s research syntheses on low-back pain treatments and management strategies, says Dr. Andrea Furlan, scientist at the Institute for Work & Health (IWH) and co-ordinating editor for CBN.

Formed in 1996 and housed at IWH until this year, CBN is one of 53 review groups that make up Cochrane, a global network of researchers, health practitioners and patients who promote evidence-informed health decision-making by producing high-quality, relevant, accessible systematic reviews and other research syntheses.

In 2018, CBN ranked fourth among the 53 groups for the number of reviews accessed in the Cochrane Library. It ranked eighth among the 53 review groups in impact factor—i.e. the number of times articles from the previous two years were cited in a year—according to a 2018 journal citation report.

The high number of citations may be due to the high quality of our reviews, says Furlan, who recently published an article in the journal Spine (doi:10.1097/BRS.0000000000003626) looking back at the review group’s achievements over the years. In spring 2020, due to a lack of funding for the group in Canada, the editorial base of CBN was transferred to the Cochrane Musculoskeletal Group in Australia. Furlan remains on the group’s editorial board.

In the article, Furlan references several external assessments of systematic reviews that held CBN reviews in high esteem. One such assessment examined the accuracy of systematic review abstracts in low-back pain research and found some form of spin in eight out of 10 reviews. The exceptions noted in the Journal of Orthopaedic & Sports Physical Therapy article were CBN reviews, which had substantial to almost perfect agreement between the abstracts and the full text.

Another example was a paper that assessed the quality of all reviews on the effectiveness of exercise for back pain. Out of 38 reviews—including five from CBN—most were found to be of low or critically low quality. Of the 38, one was judged to be moderate quality and three to be high quality. All four were CBN reviews. Cochrane reviews typically use more rigorous methods and, consequently, are less vulnerable to bias and generally more conservative in their conclusions, wrote the authors in the May 2020 issue of the Brazilian Journal of Physical Therapy.

We were pleased to have an external group assess our reviews as high quality, relevant and generally better than other, non-Cochrane, reviews, says Furlan. We were not entirely surprised, though, because we take very seriously the job of doing a systematic review. Furlan notes that Cochrane reviews have become the document upon which policy-makers, health authorities and guideline developers base their decisions—such as whether to fund or defund interventions. That’s why we conduct these reviews with such scrutiny, she adds.

CBN’s rigorous methods have also been widely adopted as standards in the field. CBN’s guidelines for conducting systematic reviews related to spinal disorders have been updated three times since they were first published in 1997, with the latest update published by Furlan in 2015. The method guidelines offer recommendations on review steps such as defining the scope of the review, assessing the literature and conducting statistical analyses.

The guidelines have been so well-received that, although they were developed for CBN reviewers, they have been widely used and cited both inside and outside Cochrane, says Furlan.

Part of the credit for Cochrane Back and Neck’s achievements goes to the support and expertise at IWH, which has a systematic review program that continues to tackle new methodological challenges, she adds. It also goes to IWH’s knowledge transfer and exchange department, for bringing together collaborators and experts from a variety of disciplines to conduct systematic reviews that are meaningful to stakeholders.

Cochrane Back and Neck reviews have been cited in 35 clinical practice guidelines from January 2017 to March 2019. The five most-cited are: 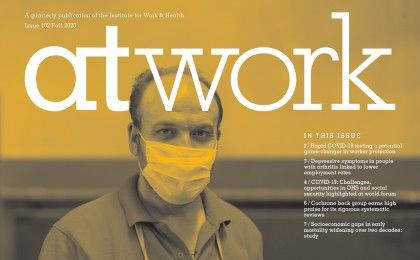