Using workers’ compensation claims data from 2012 to 2018, the study found unionized ICI construction companies had a 25-per-cent lower rate of lost-time injuries than non-unionized ones.

These findings are similar to those in the original study, also funded by OCS and published by IWH in 2015. OCS is a joint management-labour not-for-profit organization, created under the Ontario's Labour Relations Act to represent the interests of the unionized ICI sector.

Results were shared in a recent IWH Speaker Series webinar presented by IWH Scientist Dr. Lynda Robson, who co-led the study with IWH Senior Scientist and President Dr. Cam Mustard. A full report on the findings is also available on the IWH website.

The union effect on safety in the ICI construction sector: a study update

This study was not designed to examine reasons for the observed union safety effect and, therefore, cannot be definitive about what those reasons are, says Robson. That said, she notes the results are consistent with the focus of many unions on controlling occupational health and safety (OHS) risks at worksites.

We would expect this from what we know of the role of unions in workplaces. Their actions include putting OHS in collective agreements, delivering worker training, sharing OHS information, and participating in joint health and safety and worker trades committees, she says. It may also be that the presence of a union empowers workers to report unsafe conditions and refuse unsafe work.

The follow-up study also indicates that the union effect on lost-time injury rates was greatest among the largest companies. Companies with 50 or more full-time equivalent employees (FTEs) had a 44-per-cent lower rate of lost-time claims, while companies with 20 to 49 FTEs and five to 19 FTEs had reductions of 24 per cent and 25 per cent, respectively. Notably, no union effect was found among the very small companies—i.e. those with fewer than five FTEs.

The absence of a union safety effect in companies with fewer than five workers needs exploring in future research, Robson says. It appears that, in this sub-group of companies, factors related to small company size override any union safety effect. These factors could be a lack of OHS expertise, younger company age or lower average job tenure. As well, she notes, Ontario’s OHS regulatory requirements for these very small companies differ from those for larger companies.

IWH updated a previous study on the effect of unionization on safety in Ontario's industrial, commercial and institutional (ICI) construction sector. Does the update also find unionization is associated with a lower risk of injuries requiring time away from work?

The study sample drew on 24 lists of unionized contractors in 39 ICI construction sub-sectors. The lists, provided by unions and employer associations, represent a near-comprehensive picture of unionization in this sector, thus making comparison between unionized and non-unionized firms possible. For data on injury rates, the team used records obtained from the Workplace Safety and Insurance Board (WSIB).

The research team’s findings of an association between unionization and lower injury rates take into account a number of factors that could also affect rates outside of union status. That is, the team conducted statistical analysis to disentangle the independent effect of unionization from potentially confounding factors such as firm size, firm complexity (e.g. number of lines of business), construction sub-sector type and location of firm.

The study did not examine work-related fatality rates. The number of fatalities was too small to allow the type of statistical analysis used in this study (e.g. to control for firm size and sector) to examine the effects of unionization.

The findings cited in the article above are all adjusted figures. That is, they show the singular effect of unionization on lost time incidence rates, independent of other factors that may be different between unionized and non-unionized firms and which could also influence injury rates. These include firm size, firm complexity and geographical location.

It’s important to adjust for these differences, which can otherwise be what’s called “potentially confounding” variables, in order to measure the effect of unionization alone. 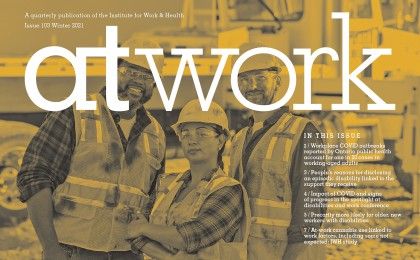