No difference in injury risks between large, small firms once OHS policies, procedures accounted for

It has been well-documented that small employers face unique challenges when it comes to occupational health and safety (OHS). In a recent study by the Institute for Work & Health (IWH) on the effect of Ontario’s working-at-heights regulations on construction sector injury rates, the 2017 traumatic injury lost-time claim rate at the smallest firms was more than twice as high as at larger firms—10.3 per 1,000 full-time employees at firms with fewer than five workers, versus 4.1 at firms with 50-plus workers. A similar pattern was found in an IWH study comparing injury frequency among unionized and non-unionized contractors in Ontario’s construction sector.

However, another study at IWH suggests that a lack of adequate protection may explain the higher work injury risks at small workplaces. This study, shared at the 2017 meeting of the international Understanding Small Enterprises conference, draws on the concept of OHS vulnerability developed by IWH Senior Scientist Dr. Peter Smith. It defines OHS vulnerability as exposure to hazards while lacking protection due to inadequate workplace policies and practices, low OHS awareness or low OHS empowerment. In a previous study, Smith has found that workers reporting OHS vulnerability are more likely to report experiencing a work-related injury in the previous 12 months.

In the study shared at the USE conference, the research team found workers at small firms said they were exposed to hazards more frequently than workers at large firms—57 per cent versus 41 per cent. (The study defined small firms as those with five to 19 workers and large firms as those with more than 500 employees.) Among the three different types of OHS vulnerability (exposure to hazard plus one form of inadequate protection), small firm workers reported higher vulnerability due to inadequate policies and procedures than those at larger firms (34 per cent versus 18 per cent). Slimmer differences between small and large workplaces were found in the percentage of workers who reported the other two types of vulnerability.

Looking at the percentage of workers who said they experienced a work-related physical injury in the previous 12 months, the team also found a higher incidence of injury among workers at small organizations than at larger organizations (18 per cent versus 13 per cent). In both groups of workers, the team found similar patterns in the association between work injury and hazard exposure and protective measures. For example, among workers who had no hazard exposure and who reported adequate OHS policies and procedures, the incidence of injury was 5.4 per cent in small organizations and 5.3 per cent in large firms. Among workers who said they were exposed to hazards and had inadequate OHS policies and procedures, in both small and large organizations, the incidence of self-reported injury was 31 per cent.

When all factors were taken into account, however, workers at small organizations in this study were 44 per cent more likely than workers at large organizations to experience a work-related injury in the previous 12 months. Notably, much of this greater risk was due to weaker OHS policies and procedures at smaller firms. In statistical analyses, the greater risk of injury in small firms was fully accounted for by differences in OHS policies and procedures. Once these were controlled for, no differences in injury risk remained between small and large firms.

This study is encouraging in suggesting that injury risks are not intrinsically higher at small firms, says Dr. Cameron Mustard, senior scientist and president of the Institute.

The study was based on surveys completed in 2015 by about 1,800 workers in Ontario and British Columbia. The participants, who worked at least 15 hours a week, were asked whether they had experienced a physical injury or illness in the previous 12 months. As part of the 27-item OHS Vulnerability Measure, developed by the Institute, workers were asked whether their jobs exposed them to common hazards. These included lifting or carrying 20 kilograms at least 10 times a day; working at heights greater than two metres; working with hazardous substances; being bullied or harassed at work; doing repetitive movements with their hands or wrists; working in a bent, twisted or awkward work posture; working in excessive noise levels or standing for more than two hours at a time.

Workers in the study were also asked about their awareness of workplace rights and responsibilities, their sense of empowerment to protect themselves, and the existence of OHS policies and procedures at their workplace. Examples of the latter included an active and effective joint health and safety committee, regular communication about safety, and prompt investigation of incidents.

The study is published in the conference proceedings, available at: www.iwh.on.ca/publications/understanding-small-enterprises-proceedings-from-2017-conference 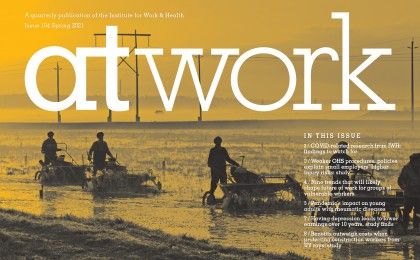