And while more research is needed to understand the reasons or factors behind this paradox, workplaces and policy-makers should not wait to address the risks of physically demanding work.

These were among the key messages delivered by Institute for Work & Health (IWH) Associate Scientist Dr. Aviroop Biswas in a recent IWH Speaker Series presentation.

Emerging research suggests that this type of very physically strenuous work is not beneficial. It may even be bad for you, he added.

The health paradox of physically demanding work: What is it and should we be concerned?

A body of evidence

In the presentation, Biswas summed up several studies pointing to this paradox. Among them is a study led by Danish researcher Dr. Andreas Holtermann and published in the European Heart Journal in April 2021 (doi:10.1093/eurheartj/ehab087). With a sample of over 100,000 women and men aged 20 to 100, followed for 10 years between 2003 and 2014, the study found people with higher levels of leisure time physical activity had a 15 per cent lower risk of a major adverse cardiovascular event—a term that includes heart attack, heart failure, stroke, bypass surgery and other serious consequences of heart disease. They also had a 40 per cent lower risk of dying from any cause.

In contrast, those with higher levels of physically demanding work had a 35 per cent greater risk of major adverse cardiovascular events and 27 per cent greater risk of dying from any cause. What’s more, Biswas noted that people who had both high levels of leisure time exercise and high levels of work-related physical activity were among those with the highest risks of major heart events.

Usually, you think that the more vigorous exercise you do, the lower your risk of cardiovascular events. But at least in this study, we’re seeing a net risk when leisure time physical activity is combined with strenuous physically demanding work,” said Biswas.

Biswas also pointed to his own research on the risk of diabetes in a sample of more than 7,000 Ontario workers, followed for 15 years. The study, published in March 2021 in the American Journal of Preventive Medicine (doi:10.1016/j.amepre.2020.09.017), found people who worked in sedentary jobs and who met Canadian physical activity guidelines—i.e. engaged in at least 150 minutes of moderate to intense leisure time physical activity a week—had a 37 per cent lower risk of developing diabetes over 15 years.

However, the benefits of intense leisure time activity on reducing diabetes risk were not observed among people working in non-sedentary occupations.

We've known of the health benefits of doing at least 150 minutes of exercise a week. Is exercise beneficial in lowering one's risks of diabetes, no matter how much one moves on the job? That's the question this study sets out to answer.

Researchers are still working to understand the physiological reasons for this physical activity paradox, Biswas noted. Don't think of physically demanding work as being the same as exercise. The physically demanding work that we’re seeing associated with heart disease is more like snow shovelling, where you’re doing a lot of arm work that increases blood pressure drastically, while your legs don’t move much, raising your blood pressure even more, said Biswas.

If you’re in poor physical shape or if your blood vessels have blockages, your heart might struggle to pump blood around your body and not get enough oxygen. That’s where we see the risk of heart attack.

Even as more evidence is being gathered, workplaces should not wait to adopt practices to protect workers who may be most at risk in their physically demanding jobs, said Biswas. These practices include allowing and encouraging workers to do warm-ups before starting a physically strenuous job task and to take frequent breaks to give their bodies time to recover, he said. 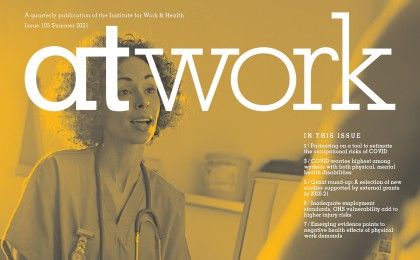