That’s according to a study by Dr. Faraz Vahid Shahidi, associate scientist at the Institute for Work & Health (IWH). It followed a large, nationally representative group of 2.1 million Canadians for 10 years and used death records to examine the long-term outcomes of people who were unemployed at one point in time, comparing those who received employment insurance (EI) benefits with those who did not.

We know that unemployment is associated with mortality in the short and long run, says Shahidi, whose study was published online in May 2021 in the American Journal of Epidemiology (doi:10.1093/aje/kwab144). Our hypothesis was, if the impact of unemployment is buffered with income support—in this case, employment insurance benefits—then the mortality effects of unemployment will be lessened. And our findings support this idea.

The study was conducted with data from the 2006 Canadian Census Health and Environment Cohort (CanCHEC), a nationally representative cohort of 6.5 million Canadians belonging to the 20 per cent of households that completed the mandatory long-form census on May 16, 2006 (Census Day). The study included only people aged 25 to 64 who were looking for work or working in a waged or salaried job (i.e. excluding people who were either self-employed or not in the labour force). For death records, the study team used individual census records linked to the Canadian Mortality Database, covering the period between May 16, 2006, and May 16, 2016.

Focusing on the 80,000-plus respondents who were jobless and looking for work on Census Day, the team then determined who among them received EI in the preceding calendar year. This was done with linkages between census data and tax files data, which about 80 per cent of the sample had consented to. The team also used a method called propensity score matching to ensure the two groups being compared—EI recipients and non-recipients—were as similar as possible in terms of socioeconomic and demographic characteristics.

We know some socioeconomic and demographic features—for example, gender, immigration status, income, and so on—predict why someone might be eligible for EI and why someone else might not, says Shahidi. Propensity score matching is a statistical tool we use to balance out those differences. In other words, it allows us to account for potential confounders.

Shahidi acknowledges several problems with the study design—among them the potential misalignment between an individual’s employment status on Census Day and their EI coverage during the preceding calendar year.

But he adds that the association between mortality and receipt of benefits was found across a large sample that included tens of thousands of respondents. He also notes the compelling size of the observed associations: over the ten years of follow up, the overall risk of mortality among EI recipients was approximately 25 per cent lower than the risk among comparable EI non-recipients.

We now have a growing body of literature on the health consequences of unemployment—and the ability of income support policies to cushion those negative effects, says Shahidi. The response by governments in some countries to expand these policies during the COVID-19 pandemic tells us that some are recognizing and acting on this evidence.

As the temporary pandemic measures will soon expire, there will be an ongoing need to strengthen the scope of our core social programs, including EI, he adds. In the short term, access to unemployment benefits can alleviate the social and economic consequences of unemployment. In the long-term, it may also improve population health and health equity. 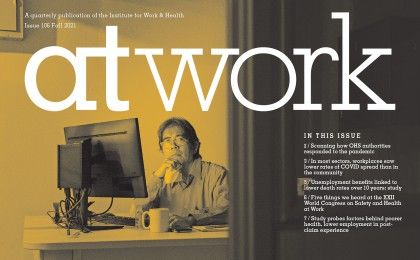