Immigrants are arriving in Canada at levels unseen in recent history. Their integration into the Canadian labour force can be a boon to employers facing staff shortages; yet it raises health and safety issues that need to be addressed.

According to research previously conducted by the Institute for Work & Health (IWH), newcomers are more likely to work in physically demanding jobs, be exposed to occupational health and safety hazards, and lack adequate access to protective workplace policies and procedures. As a result, they are at higher risk of work-related injuries and illnesses compared to non-immigrants.

In Canada, employers are responsible for keeping workers safe by providing occupational health and safety (OHS) training and ensuring that safe work practices and policies are followed. According to a new IWH study, however, when it comes to workers who are new to Canada, workplaces face particular challenges following through on this responsibility.

The workplace conditions that new immigrants and refugees experience in their first jobs in Canada play an important role in their safe and sustained work integration, says Dr. Basak Yanar, IWH associate scientist and lead author of a peer-reviewed paper published in the November 2022 issue of Safety Science (doi:10.1016/j.ssci.2022.105856).

While large employers tend to have the resources to deliver safety training and provide OHS supports to newcomers, smaller businesses tend to be challenged with OHS knowledge and capacity. And these are the types of workplaces where many immigrants and refugees find their first jobs, adds Yanar, who also presented the study findings at an IWH Speaker Series webinar in October 2020. (To watch the webinar, go to: www.iwh.on.ca/events/ speaker-series/2020-oct-13.)

Her study findings point to the need for a system approach to protecting newcomers’ health and safety, Yanar says. Employers need more support from regulatory bodies to promote OHS awareness and training in the sectors and industries that hire new immigrants. Settlement agencies can also play a larger role in offering resources to the workplaces where they find job placements.

As immigration levels grow, and as immigrants continue to be an important labour resource for many employers to fill skills deficits in Canada, she adds, it becomes even more important that employers have the knowledge, skills and resources to hire, train and retain immigrants safely.

Drawing on interviews with employers and service providers, Yanar’s study team found workplaces faced a range of issues providing health and safety training and knowledge to newcomers. Language barriers and a lack of OHS capacity were two key barriers—especially for the small and very small workplaces where many newcomers find their first jobs in Canada.

While some larger organizations said they had videos, manuals and other training resources available in different languages, they tended to be the exception. More often, the study team heard of medium- and small-sized employers trying to overcome language barriers through more informal means, such as using online translation apps, pairing newcomers with “buddies” who spoke the same language, or asking family members to help interpret OHS training and onboarding sessions.

We heard from one employer who created a simpler health and safety training document in English, sat down with the newcomer worker and went through the training, page by page. That was how this employer could be sure that the new worker understood the training, says Yanar. Indeed, not having the confidence that new hires understood their health and safety training was something that several employer participants brought up and described as a “dilemma” they faced.

Regarding the lack of OHS capacity, interviews with employers and service providers revealed that small employers sometimes lacked the OHS policies or procedures they needed. Service providers that worked on finding job placements for their newcomer clients typically performed OHS checks to ensure employer eligibility. Sometimes, employers did not meet all criteria, such as having a Workplace Safety and Insurance Board (WSIB) registration or OHS policy manuals. In such instances, the placement process would come to a halt, and the service providers had to help the employers set up their OHS infrastructure. Some service providers spoke of newcomer workers coming back after their placements had started and asking for help to address concerns about employment standards and health and safety in their workplaces.

Yanar stressed that the practices that were found wanting largely stemmed from a lack of knowledge or resources—not ill intention. The majority of employers we heard from in the study took seriously their responsibility to provide OHS training and knowledge to their newcomer staff. What they needed was better support, she says.

Another theme Yanar and her team encountered was the attribution of unsafe practices to cultural differences. Employers in the study often pointed to cultural differences to explain newcomer behaviours, such as ignoring safety protocols on the job, not paying attention to proper use of personal protective equipment (PPE) and prioritizing speed over safety.

Only a minority of employers in our study spoke of job precarity or the pressure to perform as potential reasons for some immigrant workers engaging in unsafe behaviour, despite research showing the importance of these factors, says Yanar.

Similarly, several employers said they encouraged or expected workers to come to them with concerns about hazards or unsafe situations. Only a few acknowledged the discomfort workers may feel doing so or spoke about the need to create a safe environment for workers to speak up.

We found examples of employers being focused on newcomers’ attitudes or behaviours to explain challenges that may also stem from structural disadvantages, says Yanar. She suggests that employers examine work terms and work conditions to ensure they don’t prioritize productivity over safety—or send such a message—especially to a worker population that is still largely unaware of its health and safety rights.

On the research team were two researchers supported by IWH through Access Alliance’s Immigrant Insight Scholars initiative. The career-bridging program is designed to help internationally educated researchers use and strengthen their skills, and develop the local experience and professional network needed to transition to a successful career in Canada. 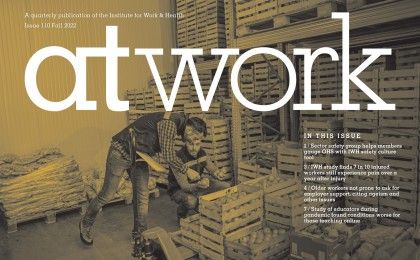