Neck pain is common among workers, and has many different causes. It can include the chronic pain of workers whose jobs can strain their necks, such as nurses’ aides or construction workers. It results from accidents, such as whiplash in drivers who’ve been rear-ended. And neck pain also includes the tension headaches in anyone who’s had a tough day at work.

One challenge is that there hasn’t been agreement on which treatments are the most effective. Since 1999, an international task force, including scientists from the Institute for Work & Health (IWH), has been working to bring some clarity to this and other issues on neck pain (see below). Their work has produced a comprehensive picture of neck pain – including its causes, how many workers report it, and how it progresses – based on all the research conducted to date.

The task force was convened following a United Nations’ (UN) initiative to improve the lives of people with musculoskeletal disorders (MSDs), which include neck pain. The UN declared 2000-2010 as the Bone and Joint Decade to focus on this issue. As its work nears completion, the task force is publishing more than 20 research studies and “best evidence” systematic reviews on neck pain. These appear in a supplement to the February 2008 issue of the scientific journal, Spine.

The biggest challenge was in defining neck pain, says Dr. Sheilah Hogg-Johnson, IWH Senior Scientist, reflecting on the work of the task force. There were about 300 different definitions of neck pain, which made it hard to compare findings from different studies.

Some of the main results from the task force are summarized below.

Here are some findings from the Bone and Joint Decade 2000-2010 Task Force on Neck Pain and Its Associated Disorders:

How common is neck pain?

About two in 100 adults say that they’ve had neck pain so severe in the past year that it’s interfered with their ability to work. Almost 12 in 100 say that activities in general have been limited because of neck pain.

These were among the findings of a review on the rate and risk factors for neck pain in the general population. The review revealed several trends from the 101 studies that met the task force’s scientific criteria (see below):

The findings show a lot of overlap with other MSDs, such as low-back pain, notes Hogg-Johnson. For instance, low-back pain is most common around middle age as well.

How many workers report neck pain? This answer varies greatly across different jobs and populations of workers, according to another review that focused on workers.

Between 11 and 15 per cent of workers limited their daily activities over the past year because of neck pain, says Institute Scientist Dr. Pierre Côté. In one Swedish study, about half of the workers with neck/upper-back pain reported going to work even though they felt they should have taken sick leave. “This suggests that external pressures such as finances, job security or deadlines may influence workers’ decision to remain at work despite being limited in some activities of daily living.”

The findings came from the review that focused on workers, which included 109 studies published from 1980 to 2006. Researchers excluded studies if the pain was associated with a serious condition such as a tumour or arthritis.

The task force conducted a separate study, the first of its kind in Canada, to find out how often workers in Ontario missed work due to neck pain. Using data from the Workplace Safety & Insurance Board (WSIB) from 1998, they found that about three per cent of Ontario workers who had a lost-time claim cited neck pain as the cause. However, this may not accurately reflect all neck pain claims. When a worker is injured, the “most severe injury” is coded in the WSIB database. A neck pain or injury may not be counted because they are given a lower coding priority relative to other injuries, such as concussions or cuts.

Canadian scientists played an important role in the Bone and Joint Decade 2000-2010 Task Force on Neck Pain and Its Associated Disorders. From the Institute for Work & Health, members of the 12-person Scientific Secretariat included:

Several IWH Adjunct Scientists were also members of the Secretariat. They included Dr. David Cassidy from the Centre for Research Expertise in Improved Disability Outcomes (CREIDO), Dr. Jaime Guzman of the Occupational Health & Safety Agency for Healthcare in Vancouver, British Columbia, and Dr. Linda Carroll of the University of Alberta. Other members came from the U.S. and Sweden.

In systematic reviews, rotating pairs of Scientific Secretariat members independently reviewed each article to determine its quality. An article was accepted only when it met strict scientific criteria. In a best evidence synthesis, more weight was given to evidence from studies with a stronger research design. (See Spine supplement for more details).

When we accounted for neck pain in workers who were coded with other musculoskeletal injuries such as low-back pain, the annual rate of neck pain rose to just over 11 per cent, says Côté, also a scientist at the Centre for Research Expertise in Improving Disability Outcomes (CREIDO).

Workers in the health-care sector had the highest percentage of claims with neck pain, followed by workers in the electrical sector, then in transportation.

Curbing neck pain in workers is not a simple matter of changing the height of a worker’s desk or ensuring that workers don’t have too many repetitive tasks. There is no one single cause of neck pain in workers, says Côté. In fact, neck pain is a result of many risk factors that are related to the workplace and to workers.

In the task force’s review, they identified several risk factors associated with neck pain. These included previous musculoskeletal pain, high job demands, low social support at work, job insecurity and repetitive work, among others. There was evidence that gender, headaches, smoking and poor job satisfaction were factors that may be associated with neck pain. In the review of the general population, exposure to tobacco, genetics and poor psychological health were also risk factors. However, there was no evidence that treating mental health issues would improve neck pain.

Although poor posture and inadequate workstation setup are risk factors for developing neck pain, the review that specifically examined workers found no evidence that modifying workstations and worker posture were effective in reducing the rate of neck pain. Côté suggests that researchers should partner with workplaces to tailor an intervention that addresses both the workplace and workers. The next generation of interventions must address the interactions between individual and workplace physical and psychosocial factors. It’s now time to roll up our sleeves and customize an evidence-based workplace intervention suited to help workers, he says.

More than 60 per cent of workers who experienced neck pain reported the same condition one year later. Yet there aren’t many factors that can be targeted to try and improve recovery.

Dr. Linda Carroll was part of a best evidence review that examined many factors to determine which ones were associated with recovery from neck pain. Most workplace factors – such as workplace setup or physical job demands – were not important in how quickly people recovered from neck pain, says Carroll, an associate professor in the department of public health sciences at the University of Alberta.

Based on 14 articles, reviewers were unable to distinguish if the neck pain cases were continuous or recurrent. They did find that blue-collar workers were six times more likely than white-collar workers to take more than three days of sick leave for neck pain, although this may reflect different job demands rather than actual pain recovery. Workers who had prior neck pain, prior sick leave, or those with little influence in their own work situation had a poorer course of recovery. There were some encouraging findings. People who did general exercise were more likely to experience improvements in neck pain, says Carroll. However, the most effective types and duration of exercise are still unknown.

Clinicians who prescribe collars for whiplash patients are likely doing more harm than good. Instead, there are three effective options for patients with whiplash and associated disorders, according to a systematic review of non-invasive neck pain treatments.

While this review provides some clarity on what works, all the treatments in the studies lasted less than 12 weeks and their effects were generally small and short-lived, notes Dr. Eric Hurwitz, an associate professor of epidemiology in the department of public health sciences at the University of Hawaii. One treatment approach is using educational videos that reassure patients, promote exercise, advise them to keep active and take pain medications as needed. The second option is exercise. Finally, mobilization – a technique to stretch joints and relieve pain – also benefits whiplash patients. These three options were compared with simply seeing a doctor, or other common treatments such as ultrasound or electrical stimulation.

We hope one outcome of the task force is that practitioners will use evidence, Hurwitz says. Results for this review were drawn from 139 studies that were admissible. Reviewers also looked at treatment approaches to chronic or recurrent pain. There were several effective options compared to no treatment, sham (fake) treatments or other options. One was supervised exercise, in which clinicians teach patients exercises and then watch them. This was more effective than just referring a patient to exercise, or giving them a brochure, says Hurwitz. A second effective option was manual therapy. This included mobilization, massage or manipulation techniques. Low-level laser therapy was also effective.

No single intervention stood out, says Hurwitz. Several interventions do have a benefit. This is why patient preference should play a strong role in treatment. Another treatment with emerging potential was acupuncture, but the evidence was weaker due to inconsistency in the findings, he says. What was clear was that soft and hard collars for whiplash did not work.

We found over and over that collars do not help, says Hurwitz. They prevent patients from participating in activities and cause muscles to weaken. There were three studies on workplace interventions for neck pain, but each looked at a different program in different settings, so the findings could not be synthesized. In general, interventions were more effective when they focused on patients regaining function as soon as possible. Long-term results were understudied.

Your patient is a 45-year-old worker who’s had intense neck pain for more than two weeks. If you’re a doctor, you’ll probably consider a referral to a physiotherapist, or offering a non-steroidal anti-inflammatory drug (NSAID). If you’re a chiropractor, you may consider offering a manual treatment such as mobilization or manipulation. These are the most common treatments for neck pain in Canada and the U.S. But deciding which of these treatments is best for your patient is difficult because there are trade-offs between the potential benefits and harms. Which treatment, on average, has the least harmful and most beneficial impact on a patient’s health?

None of the above treatments are clearly better, according to Dr. Gabrielle van der Velde, a chiropractor and PhD candidate in clinical epidemiology and health care research at the University of Toronto. Van der Velde and the research team undertook a study to identify the best treatment for non-specific neck pain. They looked at five treatments: standard NSAIDs, Cox-2 inhibiting NSAIDs (Coxibs), exercise, mobilization and manipulation.

Comparing these treatments is challenging. For instance, one potential side effect of NSAIDs is a bleeding stomach ulcer. Each treatment might make patients feel better. How do you compare these disparate treatment results on a common yardstick?

Using this approach, the greatest difference among treatments was only 4.5 life days over the average life expectancy of the simulated patient group. For quality-adjusted life expectancy, the greatest difference was 7.3 quality-adjusted life days. These differences were too small to conclude that one treatment was better than another. “This suggests that clinicians should make treatment decisions on a patient-by-patient basis,” says van der Velde. She noted that clinicians should consider patients’ preferences for treatment processes – some patients may prefer taking an NSAID, while others may prefer the hands-on approach of chiropractic treatment – as well as their attitude to risk. 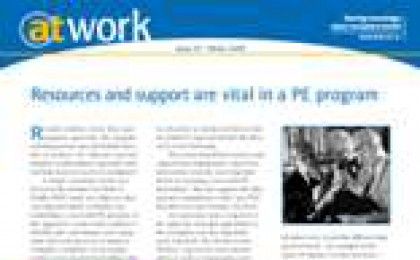