The "watchful dose": Supporting doctors in the effort to reduce the harms of opioid prescribing

An associate scientist from the Institute for Work & Health (IWH) led the creation of the innovative and easy-to-use Opioid Manager. It is designed to help doctors facilitate safe opioid use among patients seeking relief from chronic non-cancer pain, including those recovering from work injuries.

Opioids are drugs, such as codeine, oxycodone, and synthetic narcotics like fentanyl, used to relieve pain. For doctors prescribing these drugs, safety is paramount. The fear of accidental overdose and the risk of addiction are omnipresent. Assistance, however, is on the way: the Opioid Manager.

This is a new resource for physicians prescribing these drugs to recovering workers and other patients with chronic non-cancer pain (CNCP), including post-surgery, post-trauma, back and arthritis pain. It is a user-friendly, double-sided, colour-coded chart that condenses key elements of the 200-page Canadian Guideline for Safe and Effective Use of Opioids for Chronic Non-cancer Pain, released in 2010.

IWH Associate Scientist Dr. Andrea Furlan led the development of the Opioid Manager. Her research has been focused in this area for many years. In fact, she headed the research team that developed the Canadian guideline. After releasing the guideline, she started to think about next steps. She contracted the services of the Centre for Effective Practice (CEP) in Toronto and, together with Toronto Rehabilitation Institute, the CEP and the National Opioid Use Guideline Group (NOUGG), created the Opioid Manager.

Canada has highest oxycodone consumption in the world

The need to guide prescribing doctors is great, Furlan emphasizes. And statistics from both the United States and Canada reinforce this idea.

In the U.S., poisoning (overdose) is the leading cause of injury death for those ages 35 to 54 and, since 2001, prescription opioids have been the leading cause of unintentional overdose deaths—far surpassing cocaine and heroin. Since 1999, in the U.S., poisoning death rates linked to prescription opioids have more than tripled, from 4,000 to 13,800 deaths.

North of the 49th parallel, there are similar problems. In 2008, Canada had the highest rate per capita consumption of oxycodone in the world, surpassing even the U.S., according to the International Narcotics Control Board. In Ontario, opioid-related deaths have climbed to 33.3 deaths per million people per year in 2006, up from 19.4 in 2000.

Injured workers, many of whom experience significant pain in the course of recovery, are at risk of the consequences of liberal prescribing standards. Over the last decade, the number of opioid prescriptions to workers receiving workers’ compensation benefits has gone up by 100 per cent. According to the Workplace Safety and Insurance Board (WSIB), 40 per cent more workers have beenprescribed these drugs compared to 10 years ago.

When asked why workers’ prescriptions have increased so dramatically, Furlan describes the ‘perfect storm.’ First, there are the marketing practices of the pharmaceutical industry. Second, influential educational leaders have promoted opioid use, arguing that pain is a dehumanizing experience that should be controllable in the 21st century. Third, patients hear about these medications and want to try them. Furlan sums up the doctors’ dilemma: It takes five minutes to prescribe an opioid, but 30 minutes not to prescribe—that is, to think of alternatives.

Like the guideline before it, the Opioid Manager has been very well received. Over 1,480 users have downloaded it from the website since May 2010.

What’s next? Furlan outlines her ambitious plans: We are talking to providers about incorporating the Opioid Manager into Electronic Medical Records (ERMs). We are translating it into French, Spanish, Portuguese and Farsi. We are developing a patients’ version. And we are creating on-line teaching modules—continuing education for physicians, pharmacists, etc. Additionally, IWH Research Associate Nancy Carnide is leading a systematic review of studies conducted on opioid use among workers. The results are expected later this year.

The Opioid Manager is housed at McMaster University and available for download at: http://nationalpaincentre.mcmaster.ca/opioidmanager/.

The Opioid Manager also provides important clinical questions for doctors, such as: What should I consider before writing a prescription? When do I decrease or stop opioids? 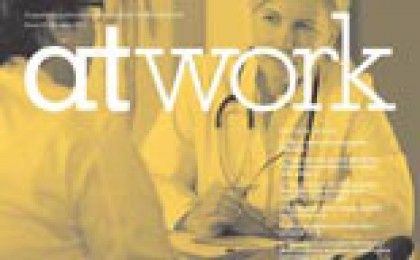