The undeclared stakeholders: Recognizing the role of co-workers in return to work

The role of co-workers is crucial in the return-to-work process, and it’s a role that’s not without challenges. This is according to two new studies that hint at ways of making return to work more of a seamless path.

Co-workers are not a neutral party when it comes to injured workers’ return to work (RTW). They can make all the difference to the success (or not) of a return, yet can also be negatively affected by the challenges involved.

This was made clear in two new qualitative studies exploring the role of co-workers. Both studies were joint ventures between past and present scientists from the Institute for Work & Health (IWH) and colleagues in Australia.

A number of studies have found that when injured workers feel they have support from co-workers, they’re more likely to return to work, says former IWH Scientist Dr. Agnieszka Kosny, now a research fellow at Australia’s Monash University, who led one of the two studies. But the goodwill of co-workers toward injured colleagues can be impeded by workplace systems.

Dr. Debra Dunstan of the University of New England in Australia, who co-authored the other study with IWH Scientist Dr. Ellen MacEachen, agrees. For this reason, she recommends improving communication with, and recognition of, co-workers regarding RTW issues. This could go a long way to smoothing the return-to-work path for injured workers and their co-workers, she says.

Co-workers “bearing the brunt” of RTW

These two new studies shed light on the undeclared stakeholders who both contribute to, and feel the often-negative effects of, RTW: the co-workers. In the first study, published online ahead of print last July by the Journal of Occupational Rehabilitation (doi:10.1007/s10926-012-9380-2), Dunstan and MacEachen conducted focus groups in Toronto with co-workers from a range of occupations. They found that co-workers’ capacity to support returning workers was based on four things:

The researchers also found that, although some co-workers in the study saw RTW in positive terms (e.g. as an opportunity to learn new skills), most described the process as detrimental. Specific negative impacts on co-workers included extra work or heavier duties, and disruptions of personal work effectiveness, organizational effectiveness and workplace social relationships. In the worst-case scenarios, co-workers suffered ‘ripple effects’ such as emotional distress, physical injury and termination of their own employment.

Privacy requirements also posed challenges. Co-workers, who saw themselves as potential resources in RTW planning, sometimes felt shut out of the process due to confidentiality requirements—even when they wanted to show support to the returning worker, says the IWH’s MacEachen. As well, co-workers’ lack of information about the nature of the workplace injury sometimes led to damaging rumours and speculation.

Support impeded by structure of work

The second study, led by Kosny, was published online ahead of print in January by the Journal of Occupational Rehabilitation (doi:10.1007/s10926-012-9411-z). This study team looked at the role of co-workers in the RTW process in the electrical construction sector; the team conducted focus groups with union representatives and injured workers, then carried out in-depth, one-on-one interviews with co-workers.

The findings echo those of Dunstan and MacEachen. Kosny’s research concluded that the structure of work (in this case, in the electrical sector) can impede co-worker support and contribute to making injured workers’ experiences difficult. A number of factors and work conditions were found to contribute to the difficulty:

Kosny underscores the importance of management. Management can model acceptable and unacceptable behaviours for their workforce, she says. It sets an example for how injured workers are regarded and treated.

Dunstan and MacEachen also propose some ways that management can improve co-workers’ experiences with RTW. These include:

For more information on Dunstan’s research, see the presentation at: www.iwh.on.ca/plenaries/2012-nov-20. You can also read about related research in the Spring 2010 issue of At Work: www.iwh.on.ca/at-work/60/co-workers-play-an-important-but-sometimes-invisible-role-in-rtw. 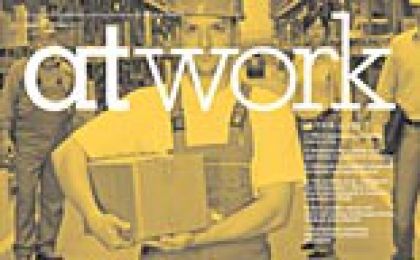