Employer supports improve function and productivity of workers with arthritis

It's often a struggle for people with arthritis to manage their health condition and not let it interfere with work. Although treatment options have improved, and symptoms of pain and stiffness are often intermittent, the chronic condition can result in missed meetings, late starts, and unproductive or missed days when flare-ups occur. Without workplace support, a diagnosis of arthritis can even end up forcing people out of a job.

However, a new study about workplace supports for people with arthritis suggests that many affected workers don’t feel they need frequent help. The study, conducted by the Institute for Work & Health (IWH), also finds that the benefits and accommodations needed—ranging from extended health benefits to flexible working hours—are often already being offered by employers and that people who are able to access them often report better outcomes at work. That can mean less job disruption, greater ability to concentrate on tasks and fewer changes to work hours.

The study, entitled “Availability, need and use of work accommodation and policies,” has been accepted for publication in the journal Arthritis Care and Research (doi:10.1002/acr.22508).

It’s the first to look in detail at what workers with arthritis need in terms of benefits and accommodations at work, what is available and what is actually used. Even more tellingly, the study provides a glimpse into whether the need, availability and use of specific supports may actually help people do their work.

The study involved interviews with 219 working individuals who were 25 years or older, living in Ontario or British Columbia, and had a diagnosis of osteoarthritis or inflammatory arthritis. The sample contained a broad range of individuals in terms of the types of jobs and industries they worked in. The participants also varied in their health conditions; though all had arthritis, some experienced no disability whereas others experienced a fair amount of pain, fatigue and functional limitations. The study asked participants about their access to and use of benefits (i.e. extended health benefits and short-term leave) and accommodations (i.e. flex time, modified schedules, equipment adaptations and work-at-home opportunities).

Overall, only a small proportion reported not being offered any benefits or accommodations (5.5 per cent). That’s a positive indication of the level of support that Canadian workplaces are already providing (see Table 1 in sidebar). Also noteworthy is that one quarter to nearly two thirds of respondents said they didn’t need various types of benefits or accommodation for their arthritis—a sign that not everyone with arthritis finds the condition disabling.

The greatest gap between need and availability was in extended health coverage, in which employer-paid health-care programs offer services not usually available through provincial health-care plans, such as physiotherapy, massage and some additional drug coverage. This benefit was the one needed by the largest proportion of respondents (three out of four), but also the one not used by the largest share (one in four) because it was not available.

Looking at the characteristics of respondents who said they needed and used benefits, the team found no difference in terms of age, gender, job tenure or part-time/full-time status. However, college- or university-educated respondents were more likely to use benefits and accommodations, as were those who had told supervisors about their arthritis. In general, people who worked in the sales and service sector or the trades, transportation and equipment operation sector had fewer benefits and accommodations available to them than people in other industries.

The study also analyzed the work outcomes of people who used their workplace supports compared to those who said they would have liked to use supports but they were unavailable. The study found different benefits and accommodations were related to positive workplace outcomes in different ways (see Table 2 in sidebar). Among the notable findings were:

Because symptoms of arthritis tend to “flare” (i.e. come and go), Gignac notes that many people will not use benefits and accommodations all of the time, but having these policies available can make an important difference.

There are things employers can do to help, and they’re not things that employers have to design from scratch,says Gignac. A lot of these things are policies or practices that companies are doing for other employees, especially as people age and start to have health problems. But what we’re finding is they can make a difference for people with arthritis as well.

Need, availability and use of benefits and accommodations

In numbers, who needed workplace support, and who saw improved outcomes?

The IWH study of 219 workers with arthritis analyzed the link between the use of benefits and accommodations and several work outcomes. The ✓s in the table below indicate programs that were linked with statistically significant better outcomes, when comparing people who needed and used the programs to people who needed but didn’t use them.

How were the work outcomes measured?

This study used several different ways to measure how participants’ health conditions affected their work. These were: 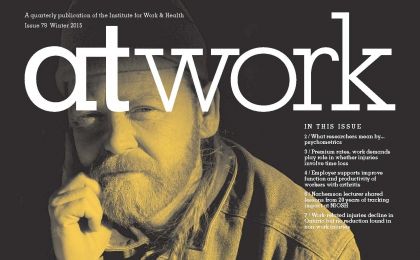