As an occupational health and safety (OHS) professional trusted by his organization to provide sound advice and implement effective OHS programs, Andy sees the value of research to inform his thinking.

He makes time to look for research when approaching a decision. He looks at multiple sources, often from a variety of disciplines, and usually has a good idea of which sources to trust. He’s not shy about sharing what he finds with his peers. Overall, Andy is confident in his ability to find research and assess its quality. For him, having the skills and the time to use research enhances his credibility: he doesn’t want to be seen as talking off the top of his head when he offers a recommendation at his workplace.

That’s a picture of how some OHS professionals integrate health and safety research into their day-to-day work. The picture emerged from a study conducted by the Institute for Work & Health (IWH) on research use in OHS in Ontario. Findings were presented at an IWH plenary in February, now available as a slidecast: www.iwh.on.ca/plenaries/2015-feb-17.

The findings are very positive, says Dwayne Van Eerd, IWH scientist and lead researcher of the study. The study participants told us research use is important and that they have the skills and motivation to find and evaluate research. However, they also said they lack the time to do it well.

Van Eerd notes that many respondents said they are adept at using research. I don’t know if it has been sufficiently acknowledged that those in the OHS profession have the skills to use research and see the value in doing so, he says.

For academics producing OHS research, the takeaway message from the study is the importance of making their research accessible. A majority of OHS professionals in our study said they want to find research in plain language, and preferably from a single place, says Van Eerd. The idea of a ‘one-stop shop’ came up a lot.

Four areas of research use

Van Eerd’s survey was sent out to about 700 OHS professionals, and 236 (or 34 per cent) took part. The team probed the survey findings further via interviews with six people and focus groups with another seven.

The study participants were all people whose job titles or responsibilities included OHS or disability management functions. About half described their roles as providing consultation or advice to organizations. All were working in the province of Ontario. We can assume that those who responded represent the segment of the profession who are already interested in and motivated by this topic, says Van Eerd.

The study focused on four areas of research use: finding/acquiring, assessing, adapting and applying evidence.

When acquiring evidence, respondents said they have the skills and incentives to use research but not enough time to search for it. When looking for research, they consistently turn to peer-reviewed literature, grey literature such as trade magazine articles and conference papers, electronic databases such as PubMed and Medline, websites and peer networks. On top of multiple sources, they also look for current research across different disciplines. Many said they lack the time and would prefer to find research evidence all in one place.

When it comes to assessing evidence, seven in 10 said they can relate and compare research findings. In interviews, participants spoke of the need for the most recent evidence.

When adapting evidence, many respondents felt they can recommend action based on what they find, but fewer reported having the skills or time to present or distil research findings. The challenge they face, according to the study, is how to tailor findings to their specific situation. The questions they need to answer are often specific, adapting the evidence to those specific needs can sometimes be a challenge, says Van Eerd.

When it comes to applying evidence, a majority of respondents said research use is a priority and the culture of their workplace supports it. When applying research, they need to think about the audience, which is where concise, plain-language summaries come in handy. Some also talked about finding ways to present research through relatable stories, because that helps their audiences remember the message.

Overall, a strong theme emerging from the interviews and focus groups is the value of credible research to support change or decision-making processes. Many spoke of having to draw on their own experiences and expertise to assess the credibility of both the source of a study and its findings. That reliance on personal expertise, says Van Eerd, is in line with evidence-based practice.

People sometimes talk about the challenge they face when there aren’t enough studies done on an intervention or when the studies have contradictory findings. I tell them they can only rely on the best available evidence at that point, in conjunction with their own expertise, says Van Eerd. That reflects the original definition of evidence-based practice—which is the integration of the latest research findings with individual experience and expertise. 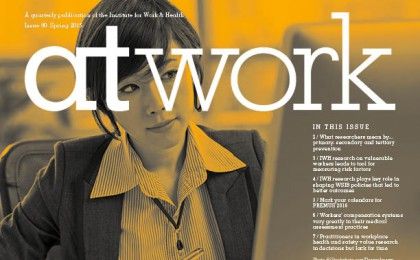