Depressive symptoms are common in the first year after people have been injured at work, and the first six months appear to be particularly important to an injured worker’s future mental health, a new study finds. This six-month period may be a window of opportunity to screen for symptoms of depression, and to provide the necessary support to those who need it, in order to prevent mental health problems in future, the study suggests.

According to the study by the Institute for Work & Health (IWH), published last September in the Journal of Occupational Rehabilitation (doi: 10.1007/s10926-015-9604-3), about half of injured workers feel many symptoms of depression at some point during the year after their injury. These are people who have not been diagnosed with depression prior to their work-related injury.

Our findings suggest that the first six months after a workplace injury are particularly important to an injured worker’s future mental health, says Carnide, a PhD student in epidemiology at the University of Toronto and a research associate at IWH. This six-month period may be a window of opportunity to screen for symptoms of depression, and to provide the necessary support to those who need it, in order to prevent mental health problems in the future.

While there has been other research showing high levels of depressive symptoms among those who have been injured at work, this research is the first to explore how symptoms of depression evolve over 12 months after a work-related injury.

In an earlier paper to come out of this work, the team had looked at the trajectory of depressive symptoms over a six-month period. This new paper builds on that to report on depressive symptoms and return-to-work outcomes one year after the injury.

To conduct the study, the research team recruited people who had made a lost-time claim for a work-related musculoskeletal injury with Ontario’s Workplace Safety and Insurance Board from 2005 to 2007. Eligible participants had to be off work at least five days, though many were off for longer. The researchers included only those people who reported no physician-diagnosed depression during the year before their injury.

Through phone interviews conducted one month, six months and 12 months after the injury, the researchers asked participants about their pain levels, depressive symptoms (20 in all, including sadness, poor appetite, difficulty concentrating, restless sleep, crying spells, to name a few), as well as their work status and return-to-work experience. Of more than 600 workers who took part in the first one-month interview, 344 completed all three follow-up interviews. Of those, 12 were excluded because they had been diagnosed with depression prior to the injury, leaving 332 people in the final sample.

Carnide’s study also found a link between course of depressive symptoms over time and work status. It found workers who had difficulty going back to work were much more likely to report depressive symptoms at some point in the year. Half of those not working one year after the injury reported high depressive symptom levels. In comparison, just under 20 per cent of those working at 12 months reported such symptoms.

Among workers who had high levels of depressive symptoms throughout the year, only 10 per cent were able to go back to and remain at work. The other nine in 10 either had not gone back to work, or went back to work with recurring work absence.

Due to the design of the study, the team couldn’t determine whether the depressive symptoms resulted in the poorer return-to-work outcomes or vice versa.

We can’t really untangle the relationship between the two, says Carnide. But it’s likely an interplay between both factors. If you’re having a hard time returning to work, that probably has an impact on your mental health. And if you’re feeling unwell mentally, it would also likely affect your ability to return to work and stay at work.

Future research is needed, she adds, to tease out the causal relationship between the two, and to explore whether early screening and intervention before six months could benefit workers’ future mental health. 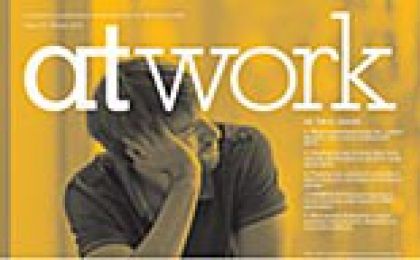