According to 2011 data, one in seven people around the world lives with a disability. Eighty per cent of these individuals live in a low- or middle-income country where rehabilitation services—services to help them function to the best of their ability—are wanting or even non-existent.

That’s why strengthening rehabilitation is emerging as a key challenge facing health systems in the 21st century, according to the World Health Organization (WHO). In February, the global body released its report, Rehabilitation in health systems, to help member countries develop and improve rehabilitation services within existing health services. Five of the nine recommendations contained in the report relied on evidence provided by a research team at the Institute for Work & Health (IWH).

Questions for a systematic review

Aimed primarily at low- and middle-income countries, the guidelines in the report set out evidence-based recommendations to help government leaders and health policy-makers develop or extend rehabilitation services and deliver them equitably at all levels of health systems.

Rehabilitation, as defined by the WHO, refers to the measures that help individuals with a disability or a disabling health condition achieve and maintain optimum functioning in interaction with their environments. Rehabilitation is instrumental in allowing people with functional limitations to remain in or return to their home or community, live independently, and participate in education, work and civic life.

The role of the IWH team, headed by Scientist Dr. Andrea Furlan, was to provide a synthesis of the available research evidence on a host of questions.

Using a framework that IWH has developed and used over many years in its systematic review program, the team searched the scientific and “grey” (i.e. not peer-reviewed) literature for studies that addressed these and several other questions.

The search had to be systematic—and broad—to make sure no relevant studies were left out. The team then went through the results to filter out studies that were duplicates or not relevant. Studies were excluded if the study population (for example, infants) or the health conditions studied (for example, obesity or addiction) were outside the parameters of the guideline questions.

After that came the time-consuming work of assessing the studies for quality. Were the studies subject to risk of bias (for example, lack of true randomization in a randomized controlled trial)? Did the team find too much variation or inconsistency in results? Could findings from the studies be applied to population groups beyond the study sample? These were just a few of the many questions the team considered at this stage.

The Institute’s depth of experience in these methods was a big reason why the team could pull off a project on this scale, says Furlan. “We had to search the literature and review every single study available up to a certain date on any kind of rehabilitation, for any health condition—physical and mental, and across different phases of the condition—and in any context or setting,” she notes. The total number of studies was well above 8,000, which the team had to get through over a period of about four months.

A roadmap for strengthening rehabilitation in health systems

The World Health Organization’s Rehabilitation in health systems provides a framework for strengthening health systems to develop, expand and improve the quality of rehabilitation services—particularly in the low- and middle-income countries around the world where 80 per cent of people with disabilities and disabling health conditions reside. Below are the nine recommendations set out in the report. The first five are informed by IWH’s literature synthesis.

Recommendation 1: Rehabilitation services should be integrated in health systems.

Recommendation 2: Rehabilitation services should be integrated into and between primary, secondary and tertiary levels of health systems.

Recommendation 3: A multi-disciplinary rehabilitation workforce should be available.

Recommendation 4: Both community and hospital rehabilitation services should be available.

Recommendation 5: Hospitals should include specialized rehabilitation units for inpatients with complex needs.

Recommendation 6: Financial resources should be allocated to rehabilitation services to implement and sustain the recommendations on service.

Recommendation 7: Where health insurance exists or is to become available, it should cover rehabilitation services.

The report can be found at: www.who.int/disabilities/rehabilitation_health_systems

To Furlan’s credit, notes IWH Director of Research Operations Emma Irvin, who was also a member of the research team, a few researchers from low- and middle-income countries had been recruited into the team, providing important perspectives at all stages of the project. For example, while screening the search results for relevance, the team had a robust debate about whether to include studies about rehabilitation after cancer, Irvin recalls.

I pushed to include people with cancer, because I felt quite strongly that the movement around cancer and chronic disease is gaining acceptance worldwide, says Irvin. But some of the team members, including a physiatrist from Colombia, said the team should leave out this disease.

From this physiatrist’s perspective, if people have cancer, they’re dying. They’re palliative. They’re not going to be rehabilitated. And we understand that perspective, she adds. In the end, the team did include cancer survivors, recognizing that, in many parts of the world, people are showing up at rehabilitation centres to try to regain function after losing body parts to the disease.

Another challenge that the team faced was the preponderance of literature from high-income and developed countries, says Irvin. The reality is, the developed world was writing the articles. Getting the grants to do an intervention study in the developed world is already very challenging, but when you’re in low- and middle-income countries, it’s even more so. You can argue there was a publication bias to a certain degree, says Irvin.

To address this challenge, the group that developed the recommendations consulted more than just the evidence from the systematic review. They also considered indirect evidence, including evidence provided by members of the Guideline Development Group. Further, the group broadened the appraisal method to also consider the values, preferences, acceptability and feasibility of outcomes and interventions as they developed the recommendations.

The result of this work is a quality document that Furlan hopes will have a far-reaching impact in offering guidance to countries around the world on how to improve the lives of people with disabilities and health conditions.

“This could affect one billion people,” she says. “It might take 25 to 30 years for these recommendations to be implemented, but the world would be a better place if these people have the rehabilitation services to enable them to participate in life, in the workforce, in leisure activities—and to be productive members of society.

She adds that the project was an important achievement for the IWH team. “Having the systematic review program in existence these many years at IWH has resulted in an in-house expertise that enables projects such as these,” says Furlan. “We have shown through this project and others that IWH is able to deliver high quality research in a timely fashion to any interested party that needs it. 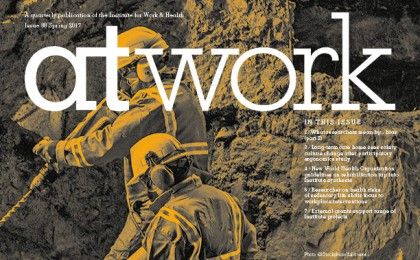