Approximately 62 per cent of Ontario workers reported participating in a mandatory occupational health and safety (OHS) awareness training initiative that was introduced by the province in July 2014. And workers who reported receiving this training were found to have higher levels of awareness of OHS rights and responsibilities compared to workers who had not received training.

However, when compared to workers in B.C., which did not undergo a change in its training requirements, the mandatory awareness training initiative in Ontario was not associated with greater levels of self-reported OHS awareness or OHS empowerment among workers in the province, according to a study by the Institute for Work & Health (IWH).

Led by IWH Senior Scientist Dr. Peter Smith, the study involved three surveys conducted at about the same time in both Ontario and B.C. The first survey took place between one and two months before the mandatory training legislation took effect in Ontario on July 1, 2014. The other two surveys took place about eight and 15 months after Ontario’s legislation took effect. During that time, there was no change in OHS training requirements in B.C., where mandatory training of new and young workers has been a requirement since 2007.

The inclusion of a control province—British Columbia—is a strength of our study, says Smith, who presented his findings at an IWH plenary in April. In Ontario, we observed a rise in OHS awareness and OHS empowerment scores in the second survey after the mandatory training was introduced. However, we also saw a similar rise in British Columbia, where no new program was introduced.

That said, the Ontario program itself appears to be effective in that higher percentages of respondents in Ontario than B.C. said they were aware of an OHS training requirement and had completed OHS awareness training, says Smith.

In the spring before the mandatory training took effect in Ontario, Smith’s team at the Institute was conducting research in both Ontario and B.C. to test the validity of a measure of OHS vulnerability (read about this study in the Winter 2017 issue of At Work).

The OHS Vulnerability Measure scores several dimensions of OHS, including exposure to hazards, OHS policies and procedures, worker awareness of OHS rights and responsibilities, and worker sense of empowerment.

OHS empowerment is measured with questions about whether respondents feel free to voice concerns about OHS hazards, whether they have time to work safely and whether they can refuse to do work that they feel is unsafe, and so on.

After receiving additional funding from the Canadian Institutes of Health Research and the Ministry of Labour’s Research Opportunity Program, Smith and his team were able to conduct an additional two surveys in both provinces.

The research question now was to see if Ontario’s mandatory awareness training resulted in changed scores on the vulnerability measure, using B.C. as a control. One of the surveys was conducted in February and March 2015 and the other in September and October that same year. In these surveys, respondents were asked to complete the OHS Vulnerability Measure, and also asked whether they were aware of their province’s mandatory training requirements, whether they had taken OHS awareness training in the previous 12 months, and what type of training they completed.

It was a matter of good timing and opportunity that a pre-training survey had taken place in both provinces to provide a baseline measure of worker awareness and empowerment for the training evaluation research, says Smith.

Comparing results in the two provinces across three surveys, the researchers found no differences in trends when it came to self-reported awareness and empowerment scores in Ontario and B.C., despite Ontario having introduced its mandatory awareness training.

It’s in the timing of the first survey that an explanation for a lack of effect may be found, Smith suggests. The mandatory training program was announced in Ontario in November 2013. By the time the first survey was conducted in April and May 2014, forward-thinking employers in the province may have already provided awareness training to their workers, ahead of the legislation coming into effect.

It’s possible that the effects of the program had already occurred in Ontario by the time we were in the field, says Smith. It may be that the catalyst for training was the announcement of the program and not the enforcement of it.

Another possible reason the mandatory training did not improve self-reported OHS awareness scores in Ontario any more than those in B.C. might have to do with the type of training taken, Smith suggests. According to the second and third surveys, online training was the most common type of training in Ontario. It was twice as prevalent among Ontario respondents as among B.C. respondents, for whom workshops were the top training method.

Empowerment is a different story. We didn’t find strong relationships between either active or non-active training modes and empowerment—and this makes sense, he adds. Increasing empowerment is not just about providing knowledge, but also about the culture of the workplace.

Referring to the limitations of the study—namely, the missing data on training received in the first survey and the timing of it—Smith says a key message from this project is the need for better integration of program evaluation when introducing large-scale interventions.

The way we did this study was opportunistic and we were fortunate to obtain timely funding to conduct the study. But to most appropriately evaluate an intervention like this, we need to devote more resources to it, and plan the evaluation approach, while the intervention is being developed, says Smith. If we did this, we could better contribute to an evidence base of what works and what doesn’t to inform future interventions. 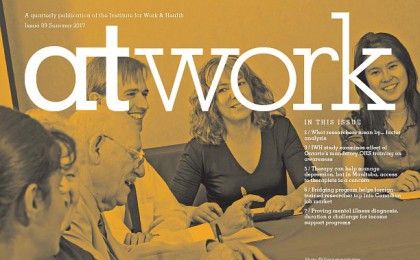