Newcomers to Canada often experience difficulty finding work and, as a result, often find themselves in precarious first jobs where they lack health and safety protection, according to a study by an Institute for Work & Health (IWH) team.

The qualitative study set out to examine newcomers’ experiences looking for work, the resources they accessed, their understanding of their rights at work, and the extent to which they received training about health and safety.

The team shared its findings last fall at a full-day Research & Policy Forum on Immigration, Work & Health at Toronto’s City Hall and in an IWH Speaker Series presentation. Slidecasts from both presentations are now available.

The team conducted this research with the support of four settlement agencies—three in the Greater Toronto Area and one in eastern Ontario. The researchers held in-depth interviews with 22 key informants in the immigration and employment field (including service providers, program developers and policy-makers). They also held focus groups with about 110 immigrants and refugees who were working or looking for work at the time. Some of these focus groups took place in Arabic and were later translated.

A number of main themes emerged from the study.

Great difficulty looking for work: Almost all participating newcomers, regardless of their immigration stream, reported difficulty finding work. They cited language barriers, their lack of Canadian experience and a lack of recognition of their foreign credentials as the main challenges.

Reliance on community networks: Many study participants found their first jobs through community contacts, such as businesses run by other newcomers. These businesses sometimes provided no health and safety training. Participants sometimes spoke of their reluctance to speak up about work conditions due to their personal connections with employers.

Programming constraints on the part of service providers: Many of the programs offered by service agencies were “client-driven,” which meant that jobseekers could get health and safety information only if they asked for it. Because service providers often did not have the time or resources to offer comprehensive programing, newcomers were referred to external websites that sometimes did not contain any health and safety information or were difficult to navigate. In almost all cases, agencies’ services ended when a client found a job; follow-up on work outcomes and experiences was rare.

Some considerations for policy-makers

Based on its findings, the IWH research team offers several considerations for policy-makers with regard to the delivery of OHS information to newcomers. The first is that workplace health and safety information could be delivered more systematically, says Dr. Basak Yanar, an IWH research associate on the team.

We found that OHS-related programming provided by service providers tended to be one-offs, says Yanar. We suggest this content be offered as a regular part of language training and employment preparation. It could be integrated into entry-level language classes so that it reaches newcomers even before they start looking for work.

One of the challenges the study identified was the diffusion of responsibility for providing this information. Having a champion at the system level, such as a policy body or ministry to coordinate OHS programming for newcomers, could help ensure that this programming is systematic and better integrated, Yanar says, adding that long-term OHS program funding for settlement agencies would be necessary if a policy solution was to involve settlement organizations.

Settlement organizations are important, trusted resources for many newcomers where they can raise issues and questions without worrying about job security, says Yanar. But if the settlement sector is to be involved, it will require an infusion of sustained—not one-off—funding and expertise.

This research has been well received by stakeholders, by both community agencies and policy-makers, says Yanar. Ontario’s Ministry of Citizenship and Immigration is already taking steps

In its funding agreements with agencies delivering settlement and integration services for refugees and vulnerable newcomers, the ministry is adding a program standard that agencies provide in-class training on OHS and employment standards as part of their economic integration programming.

And at the KEYS Job Centre—a non-profit organization in Kingston, Ont., that provides employment services to Canadians and newcomers—information about OHS and employment standards has already been incorporated into its job preparation program. As detailed in an upcoming impact case study, Karl Flecker, an immigrant employment specialist, says he and his colleagues are now using material from an IWH toolkit developed in 2015 for this purpose. They’re also encouraging the centre’s English-as-a-second-language instructors to introduce toolkit material into their classroom training.

Beyond connecting people to a job, it’s important to prepare them so they are likely to speak up if there is an issue at work, Flecker says. Indeed he’s starting to see this pan out. Since they started offering the enhanced programming, KEYS staff have noted a marked difference in post-hire follow-up conversations. Our clients are telling us about health and safety issues at work and reporting incidents,” notes Flecker. “We are slowly building empowerment.

In their own words

Here’s what a few study participants said about their experiences finding work as newcomers to Canada:

“I work in factory. After I came here maybe for three months or four months, I was working in that, picking the package, the cartons, and keeping in the skids. And I told my supervisor it is very heavy, and the job without people. I am just one. And now I have a problem in my back. I feel that I can’t bend myself. He told me, remember, if you will go now, I will send a report against you to the temporary agency and I will tell them that you have a problem in your back...they will not call you again for any kind of job. And maybe they will cancel your file.”—Focus group participant, Greater Toronto Area

“I think that this [chemical liquid] is not good for me, because all the time I have a runny nose, I cough and I sneeze. I think it’s [chemical liquid], and I need to tell the manager that this one is not good for me. And then she told me if you say that, maybe you’re going to lose your job. Because she said I need you to do [it]…And so it’s very hard for me, because she’s from my country. I know her in my country, we have a tradition. You have to respect somebody if she’s older than you…. So, I have to respect her, but sometimes she abuse(s) [me].”—Focus group participant, Greater Toronto Area 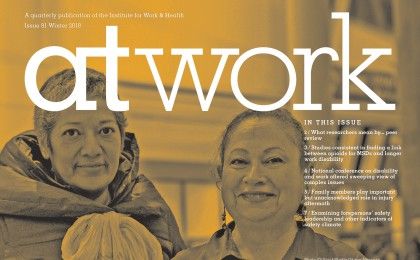