Sex/gender analysis: Men and women with arthritis have same needs at work, but not the same supports

Study of workers with arthritis finds the need for workplace supports goes unmet more often among women, and that's due to the type of jobs and workplaces women are in

Understanding sex- and gender-related difference is important—but it’s also helpful to know when men and women have more similarities than differences. Sex/gender-based analyses can reveal such situations.

“Men and women may be different in the types of jobs they do or industries they work in, but at the end of the day, having a health condition is often an equalizer when it comes to what men and women need from the workplace,” says Gignac of her study findings, which were published in the Annals of Work Exposures and Health (AWEH) special edition in April (doi:10.1093/annweh/wxx115).

Many people will remember Prime Minister Justin Trudeau's response—Because it's 2015—when he was asked about naming an equal number of women and men to his first cabinet. But across the Canadian labour force, gender parity in occupations and industries is far from a reality. The jobs and industries that were dominated by men or women in 1988 have remained just as segregated along sex and gender lines today as they were three decades ago.

That’s why work and health researchers need to apply a sex and gender lens to their work, says Dr. Peter Smith, a senior scientist at the Institute for Work & Health (IWH) and a Canadian Institutes for Health Research (CIHR) research chair in gender, work and health. The experiences of men and women are still so different, both inside and outside the labour market, says Smith. To ignore this is to miss an important part of the picture about how work and health are related.

In his work as a CIHR research chair, Smith recently co-edited a special issue of the Annals of Work Exposures and Health (AWEH), Vol. 62, No. 4, May 2018. The issue focused exclusively on sex/gender-based analyses of occupational health issues. The interest we received through the abstract submission and peer-review process exceeded our expectations, says Smith. It speaks to the increased momentum of research in this area.

But more needs to be done, he adds, particularly in developing research methods that can help us better describe how sex or gender interact with labour market and workplace exposures to produce differences in health outcomes. We can’t just assume that findings among men can be generalized to women, or vice versa, he notes. By taking a sex/gender lens to our research, we can produce findings that are relevant to all workers, not just to men or women only.

Described in this editorial package are the findings of recent studies by IWH scientists that examined sex and gender differences in work and health outcomes. Two were published in the special edition of AWEH, co-edited by Smith.

The study was based on a sample of nearly 500 baby boomers recruited for a larger study. All participants had a form of arthritis (including osteoarthritis and rheumatoid arthritis) that they had been living with for at least one year, and were working at least 15 hours a week.

Gignac and her team found that men and women were similar in needing a broad range of accommodations, and no differences were found between them in the availability of workplace supports and accommodations. (About 70 per cent of respondents said five or more of the 14 accommodations were available to them.)

Respondents drew on a wide range of accommodations, the most common being flex time, extended health benefits, personal days with pay, and work-at-home arrangements. Other accommodations were used, but less frequently—most by a quarter to a third of respondents.

Upon closer examination of the factors linked to unmet accommodation needs, however, Gignac found sex or gender did not account for differences in unmet needs, nor did health-related factors such as fatigue and pain. Rather, the factors most linked to unmet needs related largely to the work context. These included part-time work; work in industries such as education, health, and sales and retail; and high stress work.

Thus, the disparity may be explained by the larger proportion of women in the study sample who worked in sales and retail jobs or in part-time positions, where benefits are less common. Although the same factors were linked to whether the needs of women and men go unmet, these factors are more likely to apply to women, says Gignac. Women are more likely to work part-time or in education, health, sales and retail. They’re also more likely to report greater job stress. She adds this could mean that potential vulnerabilities are greater for women.

Gignac also notes that the sample excludes self-employed people, who are more likely to be men—and for whom the reality of workplace supports is completely different. We have to be aware that we’re missing an important piece of the picture when it comes to understanding men’s experiences with chronic conditions, says Gignac. It all points to how difficult it is to understand sex and gender in the workplace.

A broad range of workplace supports used by men and women

In the IWH study on the need for, and use of, workplace accommodations for arthritis, the research team asked respondents about a wide range of workplace supports that they used. Respondents could choose more than one answer. The table below shows how the responses break down along sex/gender lines. 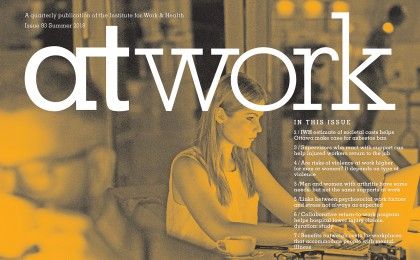