An Institute for Work & Health (IWH) study analyzing survey data collected by Statistics Canada in 2002 and 2012 found no such decline. In contrast, the study, authored by IWH’s Syme Fellow Jonathan Fan and published in the Canadian Journal of Public Health (doi: 10.17269/s41997-018-0096-8), found improvements in several psychosocial work conditions. Psychological demands decreased between the two timeframes, while co-worker support, supervisor support and job security went up. No changes were found in skill discretion, decision authority or job satisfaction.

The study was conducted with data from the Canadian Community Health Survey (CCHS), which used an abbreviated version of the Job Content Questionnaire (JCQ). The analysis was conducted with a total sample of about 28,000 respondents; respondents included in this study had be people from 15 to 74 years of age, who were employed (not self-employed) and worked at least eight hours a week. CCHS samples are generally representative of the Canadian population—with important caveats. The survey does not cover people living on First Nation reserves, in prisons, or in one of the three northern territories; it also excludes full-time members of the military.

So do these findings indicate an overall trend towards better working conditions for Canadians—perhaps as a result of a sustained effort across organizations to focus on employee engagement and enlightened leadership?

Both Fan and IWH’s Senior Scientist Dr. Peter Smith, a co-author on the paper, are cautious about that interpretation. Over the study period, the share of the workforce made up of older and more educated workers was on the rise. And this is the segment of the population that, on average, tends to enjoy better work conditions and greater job security, notes Fan.

Smith adds that another factor to consider is whether the abbreviated version of the JCQ is an accurate instrument to measure psychosocial factors in today’s workplaces. The JCQ was created 40 years ago, when the labour market was very different. In looking at these results, we have to consider whether the way people think about the questions has changed over time, or whether the shortened version used in the CCHS can detect important changes, says Smith.

He adds that, with growing concerns about mental health at work, workplace parties and researchers alike need a psychosocial survey that measures all important dimensions of work in a reliable and valid way, and that’s why work on developing and testing StressAssess (see main article) was so important. 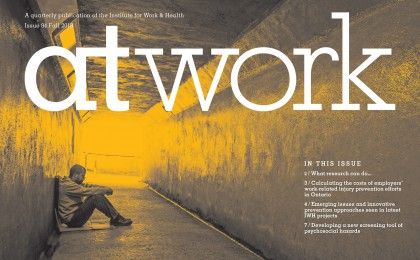