For close to five years, Tracy worked during the week and spent weekends visiting her parents in their different homes. Until her father’s death just over a year ago, Tracy (who does not want to share her real or full name) spent every Saturday with him at his long-term care facility, taking him out on walks and serving him the dishes of his birth country. Sundays were spent with her mother, who was living independently at first, even though she struggled with routine house chores.

The weekly routine left Tracy, in her 50s, on the brink of burnout. She kept asking her brother to help but he felt their parents didn’t needed that much attention. Tracy never took time off work because she feared her bookkeeping job at a bank wasn’t secure. When she was, indeed, laid off during a restructuring, it was just before her father passed away and her mother moved into a long-term care home. As a result, Tracy devoted even more time to parental care instead of looking for a new job.

Tracy is not alone in finding her work taking a backseat to family caregiving responsibilities. According to an Institute for Work & Health (IWH) study published in April 2019 in The Journals of Gerontology (open access at doi:10.1093/geronb/gbz026), women continue to bear the greatest responsibility when it comes to the impact of eldercare on work. As a result of their caregiving duties, women are much more likely than men to stop working, to work part-time or to take time off work, the study found.

In a household where both a man and woman are working, it’s more likely that her work is going to be affected should an ill parent need care with washing, dressing, feeding and getting around, says IWH Senior Scientist Dr. Peter Smith, the lead scientist on this study. And this would be the case even if both were working in similar jobs, earning similar pay. Who is expected to do non-paid caring work remains very gendered.

Women twice as likely to take time off

Smith and his team looked at the Statistics Canada Labour Force Survey (LFS) responses from 1997 to 2015 of over 5.8 million working people who were 40 years of age and older. The LFS asks people to choose from a list of options to indicate why they are not currently working when they had worked in the previous year, why they are working part-time and, if they had taken time off work in the previous week, the amount of time they took off and why. One of the options to indicate why in all cases is caring for an elderly relative (60 years of age or older).

The research team then looked at these work outcomes attributed to caring for an older relative, comparing trends over time by gender, and taking into account factors that might be associated with eldercare affecting work and with being a man or woman. These factors included the degree of sex-segregation in occupations (i.e. male- versus female-dominated jobs), being the main wage earner, and usual hours of work per week. The researchers also considered other work factors such as job permanency, time in job, unionization and size of workplace, as well as personal factors such as marital status and number of children.

Taking all of these factors into account, the study found that, when it comes to taking care of older relatives, women compared to men are:

Work disruptions due to eldercare increasing

Given the forces at play—the growing population of older adults and increasing longevity—the effects of informal eldercare on labour market participation will very likely continue to increase in the years ahead, says Smith, who holds a research chair in gender, work and health from the Canadian Institutes of Health Research. Despite the greater participation of women in the labour market, we will likely still see the responsibility for unpaid caregiving falling disproportionately on women.

This has important implications for supervisors, managers, human resources professionals and employers in general, says Smith, recommending that they recognize, and respond to, the gendered experience of caregiving.

Organizations can’t change the amount of care needed by workers’ older family members, but their policies around flexibility and autonomy may reduce the impact that caregiving has on workers’ ability to stay in the labour market or on their need to take hours off work and how many, he says.

While female workers would benefit most from such policies, progressive workplaces know that all workers benefit when policies make it easier to take time off work to tend to non-work responsibilities, be they related to eldercare work or other personal needs.

Tracy says caring for her parents often took a toll on her physical and mental health. It was like holding down two fulltime jobs. I was exhausted for months upon months, but I felt I couldn’t ask for a break at work, she says. Although she doubts that her off-hour responsibilities affected her performance at work or played a role in her layoff, Tracy is now pretty certain that she can’t go back to a full-time job. As long as I still have my mom to care for, the only kind of work I can take on at this point is a part-time job, she says. 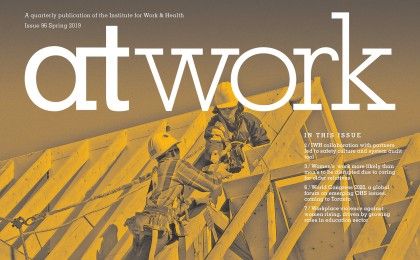