According to a Statistics Canada survey, nearly half of Canadians 15 years or older have, at some point in their lives, taken care of a family member or a friend with a health condition, disability or age-related need (i.e. eldercare). Of these, three in 10 had provided care in the previous 12 months.

Providing care while holding down a job can take a toll—on the employee with unpaid caregiving responsibilities, on his or her employer and on society at large. For the caregiver employee, the additional responsibilities can result in adverse mental and physical health outcomes, lower work performance and work disruptions. For the employer, the impact can include costs associated with absenteeism, presenteeism and turnover.

Workplace policies that support caregivers include flexible hours, telecommuting, paid or unpaid time off, and access to an employee assistance program (EAP). However, it’s one thing to have the policies in place; it’s another to raise awareness among employees and their supervisors about these options. Educational programs about caregiver support policies can play a critical role in enabling timely access to such supports.

Women are 73 per cent more likely than men to permanently leave a job due to eldercare responsibilities. They're also five times more likely to work part time to care for their older relatives, a new IWH study has found.

That is why management at one Canadian university decided to launch an information campaign to raise awareness among its 5,300 full-time employees about the supports available to those with caregiving responsibilities. It developed posters, pamphlets, workshops and web resources for all staff, as well as in-person training for supervisors and managers about caregiver accommodation best practices.

The university also worked with a research team to evaluate the costs and benefits of the initiative. According to this evaluation, the employer saved itself somewhere from $48,000 to $677,000, depending on different scenarios with respect to the effectiveness of the campaign.

This wasn’t about offering new programs to support caregiving employees as much as it was about getting the word out that support programs were already available, says Dr. Amir Mofidi, a post-doctoral fellow at the Institute for Work & Health (IWH) and lead author of the article on the economic evaluation of the initiative, published in the Journal of Occupational and Environmental Medicine in June 2019 (doi: 10.1097/JOM.0000000000001564). In some cases, it was about getting more use out of services that the university was already paying for, such as its under-used EAP.

To do the cost-benefit evaluation, the research team, which included scientists at IWH, McMaster University, University of Waterloo and University of Guelph, conducted a survey to gather baseline data about caregiving employees among the post-secondary institution’s workforce. Of the 751 full-time employees who took part in the survey, 15 per cent were caregivers (90 per cent of whom were women, and 75 per cent of whom were 47 years or older). Using this information and applying cost-benefit evaluation models and techniques, the team set out to answer three questions.

(1) What is the economic burden for caregivers and their employers in the absence of supportive workplace policies?

According to the cost analysis by Mofidi and IWH Senior Scientist Dr. Emile Tompa, the estimated economic impact on each caregiving employee at the post-secondary institution amounted to an average of $33,000 per year. This included the caregiving employee’s loss of income, time and labour spent in caregiving, and out-of-pocket costs such as meals, transportation, and goods and services.

This was only the tip of the iceberg when it came to the costs for individual caregiving employees, says Mofidi. It did not include indirect costs such as the time and labour taken away from domestic chores, loss of career opportunities and loss of pension contributions. Nor did it include intangible costs to the caregiver, such as adverse health outcomes, loss of leisure time and loss of social role engagement.

For each individual caregiver, the estimated average cost to the employer was $9,000 per year. This estimate included costs related to caregiver absenteeism and presenteeism, loss of co-worker and supervisor productivity (estimated to be 12 hours of productive time per year) and turnover. (The costs of recruiting and training someone to replace caregiving employees were based on a turnover rate of seven per cent—the percentage of caregiving employees at the university who indicated in the baseline survey that they had considered quitting in the previous 12 months.)

(2) What are the potential benefits (averted costs) of a workplace program that promotes awareness of supportive workplace policies for caregivers?

To estimate the cost-saving impact of the communication campaign, the research team relied on previous studies on the effectiveness of caregiver-friendly policies. Caregiver supports examined in these studies included employee and family assistance plans, counselling, care specialists, flexible work hours, personal days or personal leave, bereavement leave and supplemental case benefits. Findings from these studies suggested that use of such policies can lower absenteeism rates by 10 to 20 per cent, lower turnover rates by seven to 10 per cent, and increase caregiver productivity by five to 10 per cent.

(3) Can such an awareness-raising program be cost-beneficial for the employer?

Weighing these benefits against the costs of the awareness campaign, the team concluded that the program netted $48,000 to $677,000 for the university, depending on different scenarios of effectiveness.

The team’s analysis did not include the costs of providing supportive policies for caregiving employees because, in most instances, the additional use of such policies would be cost-neutral, says Tompa. Increased use of the EAP, for example, would not cost the post-secondary institution any extra, nor would the use of flexible scheduling or work-from-home policies, he explains.

If anything, greater use of these types of support would result in greater productivity. If employees aren’t stressed out because they’re late for work coming from a medical appointment, they may be able to focus on their work better and be more productive, says Tompa.

As the Canadian population ages, so are working caregivers, most of whom are at the peak of their careers, says Mofidi. As a society, we should try to come up with better solutions than to have the most productive, most valuable people in the labour market needlessly reduce their time at work due to caregiving. 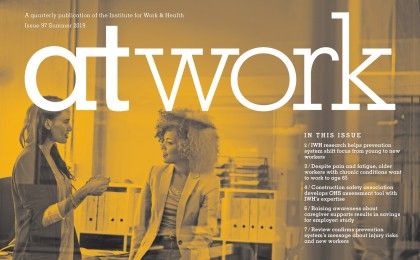