Can an eight-item questionnaire pick up on real-world differences in OHS practice?

Occupational health and safety (OHS) professionals often talk about their need for a short, concise leading indicator tool—something that can quickly assess the adequacy of workplace health and safety practices without requiring too much time and involving too many people.

The Institute for Work & Health Organizational Performance Metric (IWH-OPM) is designed to do this. With just eight items that can be scored by a person knowledgeable about an organization’s health and safety policies and practices, this instrument is intended to give a snapshot of the adequacy of those policies and practices and identify areas that could be the focus for improvement.

So how well can a set of eight items capture something as broad and multi-faceted as an organization’s OHS policies and practices? Pretty well, it turns out, according to a new study from the Institute for Work & Health (IWH).

The IWH-OPM is good for getting a quick picture of the adequacy of an organization’s health and safety policies and practices, says Dr. Basak Yanar, an IWH research associate and lead author of the paper reporting on this study, which was published in January 2020 in the International Journal of Workplace Health Management (doi: 10.1108/IJWHM-09-2018-0126). In our study, higher IWH-OPM scores were found to correspond with higher-performing organizations in terms of their observed OHS practices and policies.

That is, drawing on in-depth interviews, worksite observations and document analysis at five workplaces, the research team found a pattern emerge in the health and safety performances of high IWH-OPM scorers compared to medium IWH-OPM scorers, says Dr. Lynda Robson, IWH scientist and principal investigator of the study.

The IWH-OPM was developed by IWH and Ontario’s prevention system partners. Drawing on research and practical expertise, they identified eight questions—out of many potential questions—that could provide a quick assessment of an organization’s OHS performance. The tool, first tested in 2009, has been shown to have internal consistency and structural validity. It has been used by different types of stakeholders in several Canadian jurisdictions to strengthen safety performance in workplaces.

To better understand how IWH-OPM scores correspond with real-world organizational OHS policies and practices, Yanar and another researcher visited and conducted in-depth interviews at Ontario workplaces that had completed the IWH-OPM in 2012-2013. At each of the five organizations that took part—two high-scoring and three medium-scoring employers in four sectors (agriculture, community services, manufacturing and transportation)—the team spent two days interviewing on average seven workplace representatives in various roles and functions.

The team probed for similarities and differences in five dimensions: OHS leadership, OHS culture and climate, employee participation, OHS policies and practices, and OHS risk control. It found differences between high and medium scorers across all five categories. Below are detailed accounts of the patterns they found.

In the medium-performing organizations, managers responsible for OHS may have been personally invested in OHS, but they had other responsibilities (e.g. operations, human resources) that competed for their time. As well, the commitment to safety was less consistent at the other levels of management. At one organization, executive leadership was described as disinterested and uninvolved in safety, focusing instead on traditional business matters. At another, OHS professionals sometimes felt they lacked respect from the senior leadership. Supervisors were also described as having varying levels of commitment to health and safety in these organizations.

In high-performing organizations, safety was clearly stated as a key organizational value. Its importance was reinforced by messages from the executive leadership. Messages from management, including from executives, drove home the view that everybody is responsible for safety, that people can refuse work if it’s not safe, and that both client safety and employee safety take priority.

At the high-performing workplaces, worker input was actively sought by managers, including feedback on operational aspects of OHS and daily safety protocols. At one of the high-performing organizations, employees were encouraged to submit work requests to address hazards and make OHS suggestions. In the other, employee meetings always began with an OHS component. Employees’ familiarity with OHS policies and practices was seen positively as contributing to ongoing improvements. Their suggestions and feedback were also welcomed.

In the medium-performing organizations, employees were also given opportunities to report concerns through channels such as meetings, joint health and safety committee (JHSC) inspections and formal reporting processes. Participation, however, was mostly limited to reporting safety concerns. Opportunities for employees to become involved with decision-making processes were fewer.

High-performing and medium-performing organizations had different approaches to OHS policies and procedures and OHS communication and learning. In high-performing organizations, OHS policies and procedures were comprehensive, well documented and well implemented. Practices around the reporting of hazards and incidents were strong. Managers and supervisors regularly shared information about new OHS policies and practices with employees, using diverse communication channels such as mandatory safety meetings, logbooks, memos, flyers and pamphlets, phone calls and in-person chats. Employees were also able to regularly communicate their needs and concerns through hazard sheets, safety meetings, emails and phone calls.

For new OHS information, high-performing organizations turned to external sources such as provincial Safety Groups (networks of organizations that plan and implement improvements in their OHS management), the labour ministry, health and safety associations and OHS consultants. Their OHS knowledge management methods included performance measurement, incident analysis and corrective/preventive action, sharing of best practices among different locations, sharing of new information in management meetings and annual safety meetings. High-performing organizations were also the only ones in the study that underwent formal OHS management audits; these helped identify shortcomings in OHS management and risk controls—deficiencies that were then addressed within the following year.

Not represented in this study were workplaces that scored low on the IWH-OPM, Yanar and Robson note. Low performers were already scarce in the overall sample of Ontario workplaces that had taken the IWH-OPM in 2012-2013. Among the 250 in this overall sample that also indicated they would be interested in taking part in subsequent research, only nine scored low. We took considerable effort to recruit low-performing organizations, but our efforts were unsuccessful, says Yanar.

The IWH case study analysis can help government prevention programs and workplaces understand what IWH-OPM scores represent in terms of real-world OHS practices, policies and cultures in the workplace. Based on this analysis, OHS professionals both inside and outside an organization can use the IWH-OPM to quickly get an overall picture of how well an organization’s OHS programs and policies are working and what type of action needs to be taken to prevent injuries and illness, says Yanar.

For example, Yanar continues, if an organization scores high on the IWH-OPM (i.e. close to the maximum score), then high OHS capacity and commitment could be assumed. 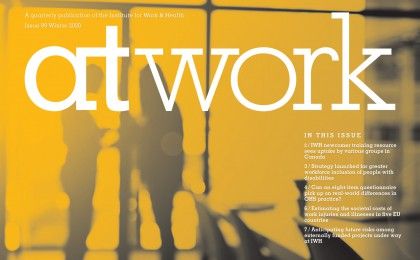