Measuring the adequacy of workers’ compensation benefits in Ontario: An update

The Institute for Work & Health (IWH) released an Issue Briefing in April 2011 that summarized research by Tompa, Scott-Marshall, Fang and Mustard (2010) on the adequacy of earnings replacement benefits for injured workers with permanent impairments. The research looked at three workers’ compensation benefit regimes: two in Ontario (one before and one after the 1990 change in the system), and one in British Columbia that was in place in the 1980s and 1990s.

As noted in the earlier Issue Briefing, a key objective of workers’ compensation programs is to provide adequate compensation for lost earnings to people who experience work-related injury or illness. Permanent impairment from workplace injury or illness can lead to lower post-injury earnings for a worker for several reasons, including decreased functional ability, disruption of career progression/seniority, a weakened or broken relationship with the injury employer, and stigma attached to being an injured worker.

For the earlier Issue Briefing, Tompa and colleagues linked workers’ compensation data in Ontario and British Columbia with earnings data from Statistics Canada’s Longitudinal Administrative Databank (LAD) for the injury year and nine years post-injury. The LAD contains information on the earnings of a sample of 20 per cent of Canadian tax filers. If selected into the LAD, tax filers are included each year over their entire life.

This Issue Briefing, based on a study by Tompa, Saunders, Mustard and Liao (2013-2015), updates the analysis of benefits adequacy in Ontario by looking at more recent cohorts of permanently impaired workers’ compensation beneficiaries, in particular those injured after changes to Ontario’s workers’ compensation legislation took effect at the beginning of 1998. The updated analysis includes workers whose injuries occurred between 1998 and 2002 (again considering nine years of follow-up data on earnings and benefits after the injury year).

One way to measure lost earnings is to compare a worker’s earnings after the date of injury with his or her earnings prior to the injury. This would correspond to how workers’ compensation benefits programs are generally designed to restore a percentage of pre-injury earnings.

However, as a measure of lost earnings, this approach has an important limitation. Many things may affect the earnings of an individual over time, other than a work injury, so it is difficult to determine how much is due to the work injury. Examples of these other influences include: accumulated work experience (which can be affected by work injury, but can also affect earnings in the absence of work injury), the acquisition of new skills and knowledge, and labour market conditions. These influences may vary with the characteristics of the worker, such as age and gender. For example, a worker who was injured at a very young age might have had a low pre-injury wage rate, but the expectation of a much higher wage rate as he or she gained experience and knowledge. In such a case, comparison of post- to pre-injury earnings would understate the earnings loss. The opposite is likely for workers transitioning into retirement.

The 2011 Issue Briefing focused on the use of controls to identify earnings losses. In that study, each workers’ compensation claimant found in the LAD was matched with up to 10 other people also in the LAD. The controls were matched with the claimants based on a number of characteristics, including similar wage and salary earnings in each of the four years prior to the injury year, and the same gender, age and province of residence. Most controls had pre-injury labour market earnings within 10 per cent of their claimant counterparts, and the remainder had earnings within 10 to 20 per cent of their claimant counterparts.

In this Issue Briefing, we present benefits adequacy results using both methods of comparison: how permanently impaired workers did compared to their pre-injury earnings and how they did compared to controls (i.e. people like them except for the injury).

An alternative approach—the one used in this and the earlier Issue Briefing— is to measure the extent to which the combination of post-injury earnings and workers’ compensation benefits replace the earnings a worker would have had if not for the injury. This can be measured using pre-injury or control group earnings. We refer to this as the earnings replacement rate.

For all three of the workers’ compensation programs examined (Ontario, late 80s; Ontario, early 90s; B.C., early 90s), benefits for permanently disabled claimants were adequate on average. For every category of physical impairment, the average after-tax earnings replacement rate was at least 90 per cent. The overall average earnings replacement rate was 99 per cent for the two Ontario programs and 104 per cent for the B.C. program.

The inclusion of CPP benefits

In May 2013, the research team reported results of a supplemental analysis that described the impact of Canada Pension Plan Disability (CPP-D) payments on the adequacy of wage-replacement benefits provided by Ontario’s workers’ compensation system. Although the CPP-D benefit has been available since 1970, the receipt of CPP disability benefit income has been reported separately on income tax forms only since 1992. Accordingly, the supplementary analysis applied only to those injured in 1992-1994. For permanent impairment beneficiaries who have been awarded a CPP-D benefit, the amount of the CPP-D benefit is deducted from the benefits paid by the workers’ compensation board. The inclusion of CPP-D benefits had a minor influence on the calculation of after-tax earnings replacement rates, increasing the average replacement rate by three percentage points, from 102 per cent for these cohorts to 105 per cent. For injuries occurring in the full 1990-94 period, the average earnings replacement rate without including CPP-D benefits was 99 per cent.

Tompa and his team recently completed its update of the initial findings reported above by analyzing benefits adequacy in Ontario for those injured in the years 1998-2002, after significant changes were made to Ontario’s workers’ compensation legislation. Bill 99, which came into effect on January 1, 1998, brought about a number of changes to benefits and services provided by the Ontario workers’ compensation system. Loss of Earnings (LOE) benefits for both short- and long-term disability claimants replaced distinct shortand long-term disability benefits under Bill 162. LOE benefits are based on an assessment of lossof- earnings capacity similar to the Future Economic Loss (FEL) assessment used in the pre-1998 system, but are not undertaken at set intervals. LOE benefits are based on a rate of 85 per cent of pre-injury post-tax earnings. After six years, benefits are locked in until age 65. At age 65, a pension is paid from funds set aside for the claimant.1 As before 1998, permanently impaired workers also receive a non-economic loss (NEL) benefit, usually awarded as a lump sum, based on the degree of permanent impairment and the age of the worker at the time of the injury.

Changes were also made to the vocational rehabilitation system. Previously, it had been administered by the Workers’ Compensation Board, but was replaced by a Labour Market Re-entry system with third-party delivery of services. Furthermore, a program of early and safe return to work was introduced in which employers were encouraged to accommodate injured workers by providing modified work, with an emphasis on self-reliance in managing the consequences of work injuries.

The after-tax earnings of claimants injured between 1998 and 2002 were compared over a 10-year period beginning with  the year of injury with (a) the earnings of controls over this period and (b) with pre-injury earnings. These comparisons were made for each of five categories of permanent impairment:

a. Comparison with controls 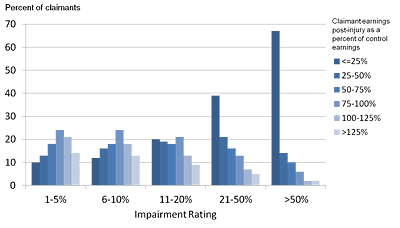 b. Comparison with pre-injury earnings 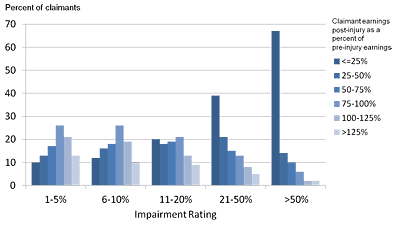 a. Comparison to controls 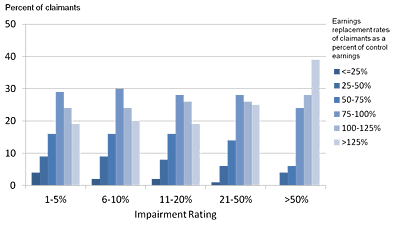 b. Comparison to pre-injury earnings

Chart 4 and Table 4 look at the distribution of earnings replacement rates by level of impairment, where the comparison is to what the injured worker had earned pre-injury. The overall pattern is similar to that of the comparison with control counterparts.

The overall average earnings replacement rate using this method is 111.5 per cent with CPP-D benefits and interest on workers’ compensation benefits included in the calculation, and 110 per cent without. 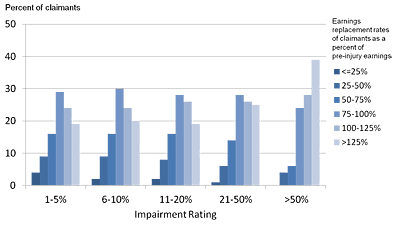 Workers’ compensation benefits for permanently disabled claimants in Ontario under the program that took effect in 1998 fully compensated for lost earnings, on average. The average earnings replacement rate, when compared to the earnings of controls, was 104 per cent; 65 per cent of the permanent impairment claimants had an earnings replacement rate of 85 per cent or more (85 per cent is the rate used in the post-1998 Ontario legislation to determine benefit payments). This figure is higher than the average earnings replacement rate of 99 per cent for the pre-1998 Ontario program reported in our 2011 Issue Briefing. About half of this difference is accounted for by the inclusion of interest on benefits and CPP-D benefits in the more recent analysis.

When the comparison is to pre-injury earnings, the average earnings replacement rate for the post-1998 program was 111 per cent with inclusion of interest and CPP-D benefits. The main difference in the results for the two methods of comparison is seen in the breakdown by age group.

The use of controls to determine earnings losses and replacement rates is preferred to the use of pre-injury earnings as the comparator, since the former is better able to account for influences beyond the injury on postinjury earnings.

It is important to keep in mind that our findings relate to workers with injuries that occurred in the period 1998-2002 (owing to the use of a nine-year post-injury follow up period), and so do not include more recent cohorts.

1 Specifically, five per cent of LOE benefits is set aside with each payment and invested on behalf of the claimant (AWCBC, 2005). The worker may choose to also contribute five per cent directly from his or her LOE benefits. The amount accumulated from these funds till age 65 is used to provide a pension, which can be paid as a lump sum or annuity.

2 All dollar amounts were adjusted to constant dollars and discounted to the injury year using a three per cent discount rate.

Analyzing the adequacy of benefits among workers’ compensation claimants in Ontario, 1999-2005. Funded by Canadian Institutes of Health Research. Completed in 2017.