The impact of IWH research in workplaces, in the community and in policy-making

Case studies help IWH track, and learn from, the way Institute stakeholders put evidence to use

Scientists at the Institute for Work & Health (IWH) strive to produce research that can be put into action. Their aim is to affect how employers and workers understand and use injury prevention measures, or how policymakers design and implement work injury and disability prevention programs. Below are just a few examples of how IWH research has made a difference in recent years.

Non-traumatic musculoskeletal disorders (MSDs) account for the largest share of disability compensation claims involving time away from work. At the Centre for Addiction and Mental Health (CAMH), a Toronto-based research centre and teaching hospital employing 2,900, the health and safety team wanted a tool to help reduce the hazards of working at computers for long stretches of time. So they joined efforts with IWH to design, develop and pilot an online office ergonomics training program.

The research team used an in-person curriculum IWH had previously developed with the U.S. Liberty Mutual Research Institute for Safety. It incorporated the latest evidence on ergonomics and complied with instructional standards from CSA Group and the American National Standards Institute. It was also reviewed by office ergonomics experts.

The team then asked learning and industrial design experts at CAMH to turn that content into an online curriculum. They tested it for usability at the University of Waterloo and sought input from focus groups at CAMH. Next, the team pilot-tested it among 72 CAMH employees.

The pilot showed that the program had a positive effect. Those who took it increased their knowledge about the risks of computer work, improved their self-efficacy (i.e. their confidence in their ability to adjust workstations to suit their needs) and made appropriate changes to their workstations. They also improved their working postures and experienced less pain or discomfort at the end of the day.

In response to these findings, CAMH made the online training available to all staff and added it to the centre’s learning management system. The office ergonomics training program is now the first place to which CAMH employees are directed when they have a problem with their work area. The online program was not only well received by staff members; it also resulted in real benefits for CAMH and its workers. It has reduced the number of full ergonomic assessments we’ve had to commission, says Cheryl Peever of Health, Safety and Wellness at CAMH. Many people are able to solve their issues by using the resource modules, rather than needing a full assessment and new equipment.

IWH is now working on adapting the program for more widespread use, with funding from the Workplace Safety and Insurance Board (WSIB) Research Advisory Council.

Our intent is to develop an evidence-based e-learning program that can be used by office workers across Canada to improve their workplaces, says IWH Senior Scientist Dr. Ben Amick, the team lead. He hopes to roll out this new version to a wider audience some time in 2014.

A growing body of research is showing that newcomers to Canada need more targeted information about occupational health and safety (OHS) and workers’ compensation, especially about their rights and responsibilities. According to IWH research, while settlement services, language schools and government agencies provide newcomers with information about employment standards (such as minimum wages), not a lot of material is offered about OHS and compensation for work injuries.

In 2011, an IWH team set out to create an information and training module—a toolkit—on workplace rights regarding OHS and workers’ compensation in Ontario. The team worked closely with partners, including the Toronto settlement service agency Skills for Change, to develop this toolkit. The final product, called Prevention is the Best Medicine (www.iwh.on.ca/pbm), included resources for learners, as well as teaching guides and support material for instructors (slides, exercises, case studies, etc.). The goal was to make the toolkit available to settlement agencies to integrate into their language and job search programs.

Interest in the toolkit went beyond provincial boundaries. It was adapted by the Workers Compensation Board of Manitoba for use by that province’s settlement service providers and translated into French.

When we saw the toolkit, we were thrilled about its range of information and the informal knowledge used to get the key points across, says Geetha Jayasinghe, who works with the Cross Cultural Community Development Program at the Manitoba Federation of Labour’s Occupational Health Centre. Its structure is perfect for using in a classroom, and we are very excited to use it in our workshops with newcomers.

However, there are still some challenges when it comes to integrating the toolkit into settlement service programming. The information is important and useful, and people (newcomers) are interested in it, says Roland Rhooms, director of programs and services at Skills for Change. The how to deliver the information remains the challenge. Teachers and classroom facilitators don’t feel confident about their own knowledge on these topics. The burden on teachers to have to ‘ramp’ up their own knowledge and fluency on these topics has meant some resistance to incorporating the tools into their lessons.

The same concern was echoed by Christine McKay, a communications officer at the WCB Manitoba. (We have spoken with) service providers who feel uncertain about presenting this type of information because they feel they need to be ‘experts’ in the subject matter, she says.

The research team is now working with Skills for Change to assess ways to overcome these barriers. One option is to redesign the toolkit into a stand-alone workshop that could be held a few times a year. Another is to modify the format so newcomers could access the information themselves, instead of having it delivered to them.

Research can play an important role in measuring the effectiveness of a policy or program. In the case of an Ontario Ministry of Labour program called the High Risk Firm Initiative, IWH research helped confirm a decision to amend processes to deliver results.

According to Sophie Dennis, the Ministry of Labour (MOL)’s assistant deputy minister of operations, IWH research helped highlight the limitations of using workers’ compensation claims data as the sole basis for determining where to target OHS enforcement or consultation interventions.

The Ministry had already begun to move towards using a wider array of information to inform its targeting strategy, says Dennis. The IWH study confirmed the importance of doing so.

The High Risk Firm Initiative began in 2004 as a program that targets employers with poor health and safety performance for more frequent inspections. In the years the program was in place, ministry inspectors used workers’ compensation claims data from the WSIB to identify firms in the worst-ranking two per cent. These would receive four inspections a year from MOL. The next eight per cent were referred to the health and safety association (HSA) for their sector.

These firms could either be approached by the HSA with offers to review their OHS practices or be referred back to the ministry for inspection (at most twice a year). However, it quickly became clear that the HSAs did not have the resources to approach all the firms assigned to them, which created an opportunity to compare outcomes between firms that did and firms that didn’t receive special attention.

A team led by IWH Senior Scientist Sheilah Hogg-Johnson tapped into WSIB work injury claims and looked for differences in outcomes among three groups: those that received HSA consultations, those that were referred back to the ministry for inspections, and those that received no special attention.

The researchers found that work injury claims measures did not significantly differ among the firms in the two years after the intervention. In both the service and manufacturing sectors, no group differences were observed in overall claim rates, lost-time claim rates, no-lost-time claim rates and the rate of disability days.

There are several possible explanations for this finding. One could be that the firms selected were not at high risk. Of the inspected firms, 60 per cent received no orders; moreover, the orders that were issued typically dealt not with actual hazards but with the way the firms organized OHS. Another reason could have been the study time frame. It may be that two years was not enough time for changes in work injury risk to show up in the stats. A further reason could have been the study’s lack of intermediate outcome measures, such as worker knowledge and workplace practices. Had data on such outcomes been available, it might have been possible to identify intermediate impacts of the interventions.

The MOL’s Sophie Dennis was briefed in 2011 on the findings. She said the IWH study confirmed the limitations of using workers’ compensation claims data as the only basis for targeting interventions—an issue the Ministry had already started to address.

It also highlighted the importance of defining early the measures used to assess the effectiveness of a program.

The research findings underscored for us the importance of thinking carefully in the design phase of proposed OHS interventions about what outcome measures should be used to shape strategy, adds Dennis.

We have changed some of our internal processes as a result of this work. 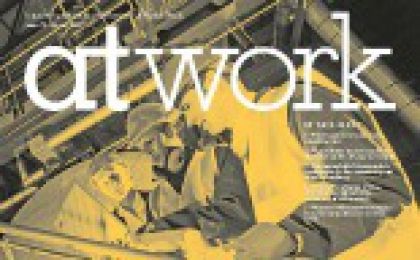