Firms in B.C.’s, Alberta’s Certificate of Recognition programs have 12 to 14 per cent greater reduction

Workplaces certified through Certificate of Recognition (COR) programs have greater reduction in lost-time injury rates than non-certified workplaces. And even among COR-certified companies, differences in injury rates can be found between lower-scoring companies and higher-scoring ones.

These were some of the findings shared in a recent presentation by Institute for Work & Health (IWH) Scientist Dr. Chris McLeod, who led a series of studies on the effectiveness of COR programs. The studies, conducted at the University of British Columbia’s Partnership for Work, Health and Safety, where he is co-director, used B.C.'s and Alberta workers’ compensation data from 2001 to 2016.

They found that participation in a COR program was linked with a 12 to 14 per cent greater reduction in lost-time injury rates. In both provinces, the link between certification and greater injury rates reduction was stronger in more recent years.

Generally, across time, across sectors, particularly in more recent years, COR-certified firms lowered their lost-time injury rates by larger percentages than similar firms that were not certified, said McLeod at the presentation, now available as a slidecast. He noted, however, that the same effect was not found for rates of no-lost-time injuries. Nor was it found among small employers (of 10 employees or fewer) certified through Alberta’s Small Employers Certificate of Recognition (SECOR) program.

The effectiveness of COR in preventing work injury: lessons from Alberta and B.C.

'COR effect' found in many sectors

COR programs are offered in most provinces and territories across the country. Although details vary from one jurisdiction to another, these programs typically let employers take a voluntary audit to show that their occupational health and safety (OHS) management systems meet established standards. The incentives for participation include lower workers’ compensation premiums and, in some sectors, preferential treatment during contract bids, said McLeod.

Although COR has been around for many years—the program had its start in Alberta’s construction industry about 25 years ago—its effectiveness has been the subject of very little research. In McLeod’s project, two types of study designs were used to measure the effectiveness of certification on injury rates.

A challenge in studying this type of voluntary program is how to address the potential for selection bias—that is, the possibility that companies taking part in such programs may be fundamentally different from those that don’t. To address that challenge, McLeod also used a second study design—a matching process to create a comparison group. For every certified company included in the study, the research team looked for a non-certified company that was similar in firm size, subsector and workers’ compensation premium base rate. Applying a difference-in-difference analysis to the matched samples, the research team found that results were similar to those produced when unmatched samples were used.

Video short
A research team at looked at the injury rates of firms that received COR Certification for occupational health and safety in British Columbia. Here's what the team found.

Delving into detailed firm scores provided by the B.C. Construction Safety Association, McLeod’s team also examined the link between audit scores and injury rates. Results showed a clear and consistent difference in injury rates between firms that achieved the minimum score of 80 per cent required to be certified and firms that scored between 96 to 100 per cent. Moreover, most of the difference could be attributed to how firms scored on six of the audit’s 14 elements (see sidebar). The most notable were investigations and reporting and workplace hazard assessment and control.

Our continuing work will focus more on which of the 14 elements in the COR audit are predictive of injury rates, says McLeod. This is one area where we have a real opportunity to refine our focus and make improvements in prevention efforts.

A study by Dr. Chris McLeod analyzed audit scores from a sample of B.C. construction companies. It found scores varied the most for six of COR’s 14 elements (bolded below). 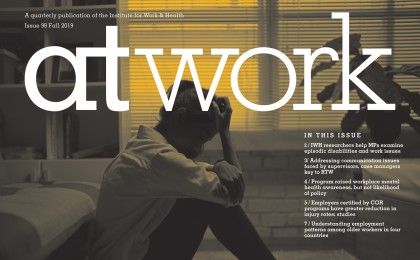